You are here: Home / Music / Electronic / Song of the Day – Epidaurus: “Mitternachtstraum” 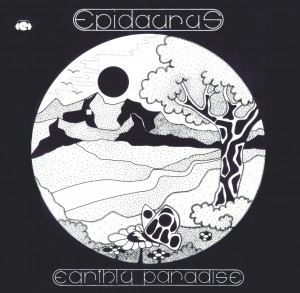 Today’s exhibit is a terrific example of mid-1970s German electronic music, sounding very similar to the offerings of Tangerine Dream from that era. Unfortunately, very little is known about this band, other than the musician’s names, and the fact that this album, (Earthly Paradise), released in 1977, was their one and only release (that is until a very poorly received 1994 followup, Endangered). The first couple of tracks on the album feature some very forgettable female vocals, but the underlying music on those 2 songs, as well as on the remaining instrumental tracks, is top-notch prog rock. Only on this track, Mitternachtstraum (which translates loosely to “midnight dream”) do they go full-on electronic.

The album is well-known to collectors, as supposedly only 500 copies were pressed originally, reputedly going for $300 these days. Fortunately in the Internet age we don’t have to shell out that kind of money to enjoy this driving, pulsating synth-rock masterpiece.