What’s our topic this time on The Award Winning 3D RadioActivity?  Select choices from an unordered list of 660 songs (initially 500) that are believed to have been most influential in shaping the course of rock and roll.

It’s The Rock and Roll Hall of Fame’s “The Songs That Shaped Rock and Roll“!   Organized by Hall of Fame museum curator James Henke who, according to the hall, “compiled the list with input from the museum’s curatorial staff and numerous rock critics and music experts.” The list is part of a permanent exhibit at the museum, and was envisioned as part of the museum from its opening in 1995. It contains songs recorded from the 1920s through the 1990s. The Beatles and The Rolling Stones are the most represented, with eight songs each. Elvis Presley has seven songs, while The Beach Boys, Bob Dylan, Led Zeppelin, Bruce Springsteen, Stevie Wonder and Chuck Berry each have five. Let’s see how many we can get to for you! 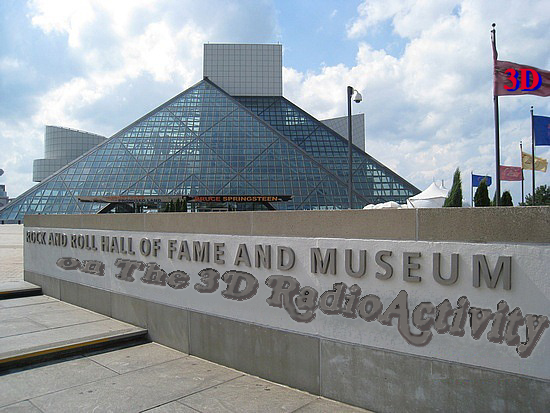 Check us out on Groovy Radio, TuneIn.com and InternetFM too. There was another record number of hits this week on the Facebook page, if that was you, thanks for stopping by and please take a few moments to add some likes to the programs listed in the photos area. I’d like to ask you to tell your friends about our program too.

If you have any ideas for our next shows please be sure to let me know. It’s easy to send an email by clicking on my name below or message me on Facebook, where you will find links to all the previous podcasts to “Like” along with the graphics in the “Photo” section.