You are here: Home / Everything Else / Thirty-Six hours in Boston: Family, Food, Drinks,and Dance 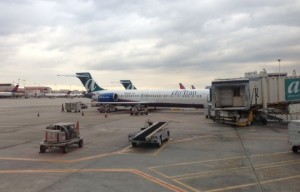 As a parent, one attends many sporting events, band concerts (of the school variety) and the occasional dance recital.

In many cases, that ends when your child graduates high school. Some of you have talented kids who can carry that on at the next level.

I jokingly told a Chicago Bears player that my son was playing on Saturdays at USC.  After he looked at me with this quizzical look that implied, “You have a kid playing Division I football?” I sheepishly grinned and remarked, “He’s in the Trojan Marching Band.”  We both laughed.

But this isn’t about him.  Although we have seen him perform several times during his career there, we now have another member of the family participating in collegiate extracurricular activities.  We have to support both kids in their academic pursuits and other collegiate events.

Our daughter decided that she wanted to be on the East coast, and is attending Emerson College in Boston.  She was always involved in dance, and to no one’s surprise, has continued her passion in college.  She auditioned for, and accepted into the Emerson Urban Dance Theater, a student run dance group.  I was invited to see her in the group’s year-end show.

I was reminded that this was a performance, and not a “recital” like I was forced (just kidding) to attend through her middle and high school years.

So I dug into my bag of goodies and found one of my Air Tran free tickets I racked up while getting “bumped” during spring break.  The good news was that the airfare was free. The bad news was that in order to get to Boston, I would have to fly from Milwaukee, via Atlanta.  That’s today’s airline logic for you.  But, free is still free, so off I went a week ago.

My journey began at breakfast in Milwaukee – a bagel nothing special, then off to Hotlanta, where a three-hour layover awaited me.  I am fortunate to have friends seemingly everywhere, and Atlanta is no exception. My friend Jonathan, picked me up at Hartsfield International, and whisked us off to nearby Forest Park, where I lunched on beef and noodle soup, and some of the freshest spring rolls I’ve ever savored  at Pho Dai Loi, a Vietnamese restaurant.  Then it was back to airport for my afternoon flight to Logan.

One of the best things about Boston is that their transit system is so convenient.  It took all of half an hour to get to the Cambridge/MIT “T” stop where another family friend picked me up, and we went into the city to rendezvous with my daughter for dinner.

Boston, and all of New England is known for it’s seafood, and one of the best they have to offer is Legal Seafood.  www.legalseafoods.com

While waiting for the evening’s rehearsal to be finished, and my daughter to arrive, we savored a Harpoon IPA and Ommegang Abbey Ale.  Then, I had the best piece of Mahi-Mahi that you could imagine cooked with their “everything” spice.  The topping reminded me of  an “everything” bagel, and was prepared to perfection. 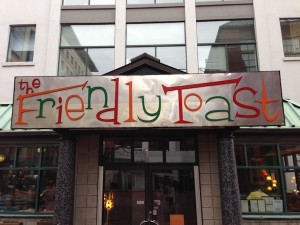 My family is notorious for moving from one meal to the next.  The following morning, breakfast/brunch/lunch was procured at a most unusual eatery.  The Friendly Toast is a decidedly hip place in a decidedly unhip concrete, steel, and glass building in Cambridge, near the MIT campus.  Inside, it reminded me of Breadman’s in Chapel Hill, a favorite late night haunt that has been around since the mid seventies.  It seems that you have to have a lot body art or piercings to work at either place. The bartender I watched (we ate at the counter) was whipping up some mean Bloody Mary’s, in a full sixteen-ounce glasses. The counter itself had loads of Wacky Pack stickers affixed to the table top, covered by glass.  In case you don’t remember, Wacky Packages were “Topps bubble gum parody stickers that made fun of household products of their time.” It brought back quite a few memories, as I loved those stickers.

Here’s a link to more on Wacky packages   http://wackypacks.tripod.com/history.html

My meal was a “St. Tropez”  omelet – smoked salmon, scallions, onion and goat cheese (which I had substituted in lieu of brie) and topped with sour cream.  Not a low calorie item, but very delicious, and it came with “anadama” toast, made with corn meal and molasses.  thefriendlytoast.net   1 Hampshire St., in Kendall Square.  Fabulous.

The rest of day was spent exploring the Cambridge area, soaking up the sights and sounds of a college town, while in search of used record stores.  It’s tough to resist the amount of material that can be found in second hand record shops, but I won’t buy vinyl, because it’s too difficult to haul back to Chicago.  This led me to Cheapo Records, 538 Massachusetts Ave (http://www.cheaporecords.com/)  I look for things that I can’t borrow from friends and would be a nice addition to the Acid Flashback music library.

After agonizing over the plethora of possible acquisitions, and using great restraint, I settled on four discs:  “Ghosts” by The Strawbs, a prog rock classic; “Green Onions” from Booker T & the M.G.’s; “Barabajagal” from Donovan, a album that includes “Atlantis,” in addition to the title track; and lastly, “20 Great Blues Recordings from the 50’s and 60’s,” including Jimmy Witherspoon, Lightning Hopkins, Elmore James, BB King, and many more that will augment the blues tunes on the station. 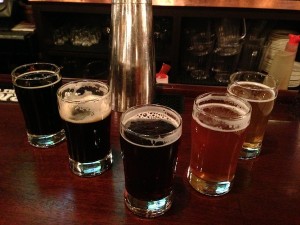 Next stop was at the John Harvard Brewhouse to watch the end of the early Sunday NFL games, and have some liquid lunch, along with spinach and artichoke dip.  Instead of picking one beer, I had the sampler and got to savor, in no particular order, a pilsner, a pale ale, an imperial red ale, a dark ale, and a porter.  My favorites were the dark ale and the imperial red.

The main event Sunday evening was the dance performance. About 150 friends and family of the students packed most of a small stage on the Emerson campus for the second of two shows that night.  It was quite a lively crowd that cheered on every move and step of the dancers.  Here is a promotional video from last year’s EUDT

The show that I saw has not yet been posted.

When it was all over, where did my tap dancer want to go?   Ben and Jerry’s, so off we went for some of Vermont’s finest.  By the time was got back to my friend’s house at 10 PM, no one appeared to still be serving food in the immediate area, and there was no desire to set out in the cold, light rain that had begun to fall earlier in the evening.  Thus, it was raid the refrigerator time, and watch the latest episode of “Homeland,” my new favorite television show, after “Fringe,” of course.

The following morning it was back to the airport for the circuitous trip back home. I’m glad I got to go.  As our kids get older, and busier with their lives, these trips will become fewer and fewer.