You are here: Home / Music / Alternative / Song Of The Day by Eric Berman – “Sad Song” by Lou Reed 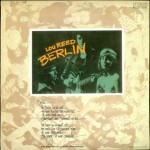 When Lou Reed’s Berlin came out in 1973, it was met with a huge shrug. Hot off the heels of “Walk On The Wild Side” success and the Transformer album produced by David Bowie, Reed worked with producer Bob Ezrin who had a taste for the absurd and theatrical.
Departure is an understatement describing what Reed and Ezrin delivered to the American public. A story about a suicidal mother who was a hooker and her boyfriend wasn’t exactly easy listening, although, nobody having any knowledge about Reed’s past with The Velvet Underground should have been surprised that he could, or would, deliver such a morbid, dense and highly radio-unfriendly album.
Several of the album’s songs were reworked versions of songs Reed had recorded before, including “Caroline Says” (originally recorded by the Velvet Underground under the title “Stephanie Says”) and the album’s title track, which was on Reed’s first eponymous solo release following the demise of the Velvets. Over time, “Berlin” has rightfully gained in stature, sporting some songs that are now considered Reed classics including “Lady Day,” “Oh Jim,” “How Do You Think It Feels” and today’s Song Of The Day.
Because of its poor reception, Reed never properly toured the album after it was released, and finally got around to taking it on the road in 2007 backed by a 30-piece band (as captured on the superb Julian Schnabel-directed DVD, Lou Reed’s Berlin.)