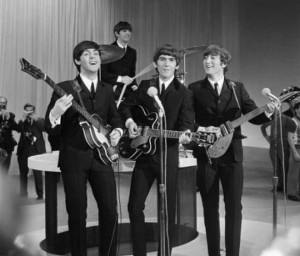 1964, The Beatles recorded a seven-song appearance for the BBC Radio program Saturday Club. They played All My Loving, Money, The Hippy Hippy Shake, I Want to Hold Your Hand, Roll Over Beethoven Johnny B. Goode, and I Wanna Be Your Man. The show was broadcast on February 15, while the Beatles were in the US.

1967, The Young Rascals, The Doors, and Sopwith Camel play at Winterland in San Francisco.

1968, San Francisco’s underground FM station KMPX holds a ballot among its listeners to find out who would be the best candidate on a pro-grass ticket. The people say they want Bob Dylan for president, Paul Butterfield for vice-president, George Harrison as U.N. ambassador, Jefferson Airplane as the Secretary of Transportation, and the Grateful Dead as attorney general.

1971, Black Sabbath released Paranoid, their second studio album. The album features the band’s best-known signature songs, including the title track, “Iron Man” and “War Pigs.” The album was originally titled War Pigs, but allegedly the record company changed it to Paranoid, fearing backlash from supporters of the ongoing Vietnam War.

1974, Aerosmith played at the Michigan Theatre in Detroit, the first date on their 56-date North American Get Your Wings Tour.

1977, Andy Gibb was at number one on the singles chart with “I Just Want To Be Your Everything” a song written by his Bee Gee brother Barry.

1978, Rush played at the Aragon Ballroom in Chicago.

1980, Pink Floyd released Another Brick In The Wall, (Part 2) in the US. The single peaked at number one on both the US and UK charts, giving Pink Floyd their first and only chart topping single. The single went to the first position in many other countries, including Australia, Germany and Italy.

1981, The Police played the first night of a North American tour at The University of Montreal, Quebec, Canada during their Zenyatta Mondatta World Tour.

1993, R.E.M. played a Greenpeace Benefit show at the 40 watt Club, Athens, Georgia, for 500 people. The show was recorded on a solar powered mobile recording studio.

1994, Nirvana plays the Seattle Arena. It is the band’s last US show.

1994, Oasis started recording their debut album Definitely Maybe, at Monrow studios in South Wales. When released in August 1994, it became the fastest selling debut album of all time in the UK. It was later surpassed in 2006 by Arctic Monkeys debut album Whatever People Say I Am, That’s What I’m Not. The album went on to sell over 12 million copies worldwide.