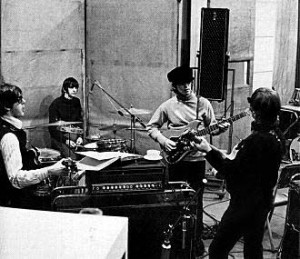 1966, The Beatles returned to Abbey Road studios to complete recording on “Yellow Submarine. ” The band, plus friends and members of the staff helped search for a “weird instrument” to create the desired sound effects.  John Lennon ended up blowing bubbles in a bucket of water.  Paul and John imitated different voices.  Roadie Mal Evans played on a bass drum strapped to his chest, marching around the studio with The Beatles following behind singing “We all live in a yellow submarine.”

1966, The Who fly into Arlanda Airport, Stockholm. Pete Townshend is interviewed for a Swedish magazine at the airport. He tells them he is currently working on a musical called “Summer City”.

1967, The Beatles release Sgt. Pepper’s Lonely Hearts Club Band. Sgt. Pepper became the first Beatles album to be issued simultaneously around the world. It was also the first Beatles album where the track listings were exactly the same for the UK and US versions. The band’s eighth LP, it debuted in the UK at number one, where it stayed for 22 consecutive weeks. The album sold 250,000 copies during the first seven days.

1967, David Bowie released his self titled debut studio album. Two singles were released from the album, “Rubber Band” and “The Laughing Gnome.”

1967, Tommy James & the Shondells performed at the Sports Arena in Toledo, Ohio.

1968, Simon and Garfunkel went to number one on the singles chart with “Mrs Robinson.” The song was featured in the Dustin Hoffman and Ann Bancroft film The Graduate. A cover version by the Lemonheads was a hit in 1992.

1968, Cream appeared at the Edmonton Gardens in Edmonton, Alberta, Canada.

1968, Pink Floyd played three shows in the Netherlands on this date. First a 2 o’clock in the afternoon show at Lijn 3 in Amsterdam, as a replacement for Captain Beefheart, who cancelled. Secondly at 8 PM, the band played at ‘t Smurf, De Engh, Bussum. Lastly, a late show at Eurobeurs, Apeldoorn. The band arrived so tardy, that they played past their allotted time. When the promoter turned on the house lights to make the band quit playing and start the “disco,” an argument started between Roger Waters and the promoter. It got so heated that the local police had to be called in to break it up.

1969, The Who performed at Kiel Auditorium, St. Louis, Missouri.

1969, The Plastic Ono Band recorded “Give Peace A Chance” during a “bed-in” at the Hotel La Reine in Montreal, Canada. Producer Phil Spector, poet Allan Ginsberg and writer Timothy Leary all sang on the song.

1971, The two-room shack in Tupelo, Mississippi, where Elvis Presley was born on January 8, 1935 was opened to the public as a tourist attraction.

1972, Pink Floyd were working at Abbey Road studios, London on Dark Side Of The Moon.

1973, Former Soft Machine drummer Robert Wyatt broke his spine after attempting to leave a party by climbing down a drainpipe and falling three stories. It left Wyatt permanently crippled and confined to a wheelchair.

1975, The Rolling Stones kicked off their biggest ever US tour at Assembly Center at Louisiana State University in Baton Rouge. The tour would take in 45 shows in 26 cities. Guitarist Ron Wood joined The Stones on tour for the first time, replacing Mick Taylor.

1977, Bob Marley and The Wailers played the first of four nights at the Rainbow Theatre in London. There were six nights booked at the Rainbow, but the last two shows were cancelled due to a serious toe injury Marley received, in a friendly football game with French journalists, just before the tour’s start in Paris. Subsequently, the tour’s second leg in the United States was postponed and then cancelled.

1978, U2 appeared at Mount Temple Comprehensive School in Dublin, Ireland.

1981, The first issue of the Heavy Metal magazine Kerrang! was published as a special pull-out by UK weekly music paper Sounds. AC/DC appeared on the front cover, and there were features on Motorhead, Girlschool and Saxon.

1985, Prince & The Revolution started a three-week run at number one on the US album chart with Around The World In A Day.

1991, American soul singer David Ruffin died of a drug overdose. After taking a large amount of cocaine Ruffin passed out, a friend drove him to a hospital in Philadelphia, where he later died. He was one of the lead singers of The Temptations (1964–68) during the group’s “Classic Five” period as it was later known. He was the lead voice on such famous songs as “My Girl” and “Ain’t Too Proud to Beg”.

2006, The 1994 debut album by Oasis, Definitely Maybe, was voted the greatest album of all time in a survey to mark 50 years of the Official UK Albums Chart. The Beatles came in second and third place with Sgt Pepper’s Lonely Hearts Club Band and Revolver, OK Computer by Radiohead was fourth and (What’s the Story) Morning Glory by Oasis was voted fifth.

2013, Modern Vampires of the City by Vampire Weekend went to number one on the US album charts. Their second album Contra’ also debuted at the top spot in 2010, making this the first time an independent rock band had entered at number one with two consecutive releases. Modern Vampires of the City also shattered the previous record for first week vinyl sales, moving nearly 10,000 units.