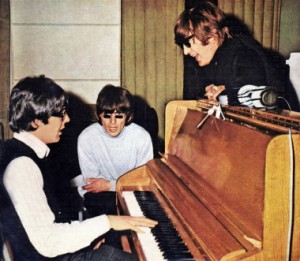 1965, The Beatles recorded “Run For Your Life” in its entirety, in five takes for their upcoming album Rubber Soul at Abbey Road Studio’s London. John Lennon later admits to lifting two lines from Elvis Presley’s 1955 hit “Baby Let’s Play House.” The group also works on another new Lennon song “This Bird Has Flown,” later known as “Norwegian Wood (This Bird Has Flown.”) The track included George Harrison’s double-tracked sitar part, the first appearance of an Indian instrument on a pop record.

1968, Big Brother And The Holding Company went to number one on the US album chart with Cheap Thrills. It spent a total of eight weeks in the top spot.

1968, Pink Floyd were at ORTF TV Studios in Paris where footage of the band “larking about on the London underground combined with shots of London landmarks” were used as a backdrop while the band played “Let There Be More Light.” It was broadcast on the arts program A L’Affiche Du Monde.

1969, The English press announces that Led Zeppelin will receive “the highest fee ever paid to a British group for a one-nighter in this country,” when they appear at London’s Lyceum, though the actual amount is not revealed.

1969, A DJ on Detroit’s WKNR radio station received a phone call telling him that if you play The Beatles “Strawberry Fields Forever” backwards, you hear John Lennon say the words “I buried Paul.” This started a worldwide rumor that Paul McCartney was dead.

1971, Gene Vincent (Vincent Eugene Craddock), died from a perforated ulcer, aged 36. He had the 1956 US number seven and UK number 16 single “Be Bop A Lula.” Vincent appeared in the film, The Girl Can’t Help It with Jayne Mansfield. In 1960, while on tour in the UK, Vincent and songwriter Sharon Sheeley were seriously injured the car crash that killed Eddie Cochran.

1973, Pink Floyd perform at Munchener Olympiahalle at Olympia Park, in Munich, Germany. It was a typical 1973 show, which included Dark Side of the Moon as the second set of their shows. The support act was Fumble. 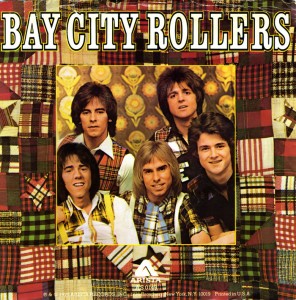 1974, The Bay City Rollers went to number one on the UK album chart with their debut album Rollin. The album included three British chart hits “Remember,” “Shang-a-Lang,” “Summerlove Sensation,” and the debut of “Saturday Night,” which was never a British hit, despite being a number one smash in America.

1974, If You Love Me, Let Me Know by Olivia Newton-John spent its only week at number one on the US album charts.

1974, The who album Odds and Sods is released in the US. Jim Miller in Rolling Stone calls it “flawed but interesting.”

1975, Rod Stewart and The Faces made their final live appearance when they played at Nassau Coliseum in Uniondale, New York.

1977, The Grateful Dead performed at Manor Hall in Austin, Texas.

1978, While living at the Chelsea Hotel in New York City, Sex Pistol Sid Vicious called the police to say that someone had stabbed his girlfriend Nancy Spungen. He was arrested and charged with murder and placed in the detox unit of a New York prison.

1981, King Crimson appeared at the Music Centre, Utrecht, in the Netherlands.

1991, Simply Red’s fourth album Stars went to number one on the UK chart for the first of five times, featuring the singles “Thrill Me,” “For Your Babies,” and the title track “Stars.” The album became the biggest seller of 1991 and 1992 in the UK spending 134 weeks on the chart.

1994, Pink Floyd played the first of a 15-night run at Earls Court, London, England. Less than a minute after the band had started playing “Shine On You Crazy Diamond,” a scaffolding stand holding 1200 fans, collapsed, throwing hundreds of people 20 feet to the ground. It took over an hour to free everyone from the twisted wreckage, ninety-six people were injured, with 36 needing hospital treatment. Six were detained overnight with back, neck and rib injuries. Pink Floyd sent a free T-shirt and a note of apology to all the fans who had been seated in the stand that collapsed. The show was immediately cancelled and re-scheduled.

1997, John Denver was killed when the handmade, experimental airplane he was flying, ran out of gas and crashed off the coast of Monterrey Bay, California. The 53 year old star had scored 15 songs on Billboard’s Top 40 Pop chart, ten of which reached number one on either Billboard’s Adult Contemporary or Country chart.

2005, Motley Crue drummer Tommy Lee suffered minor burns at a concert in Casper, Wyoming during a pyrotechnics explosion. Lee was treated at a local hospital for the injuries to his arm and face, which occurred while he was suspended from a wire thirty feet above the stage.

2008, Oasis went to number one on the UK album chart with Dig Out Your Soul the band’s seventh and final studio album.