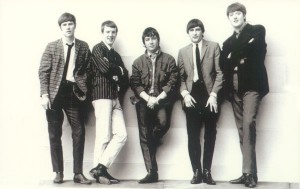 1964, The Animals started a three week run at number one on the singles chart with “House Of The Rising Sun.” When first released the record company printed the time of the song on the record as three minutes feeling that the real time of four minutes was too long for radio airplay.

1965, Sonny & Cher made their first live UK appearance when they appeared at the 100 Club in London.

1965, The Rolling Stones recorded their eighth single “Get Off Of My Cloud” at RCA studios in Hollywood. The song peaked at number one in the US and the UK.

1966, John Lennon started work in Germany on his role as Private Gripweed in the film How I Won The War.

1968, On their first ever visit to the UK The Doors appeared on Top of The Pops performing “Hello I Love You” live on the TV show.

1969, The Stooges made their New York debut at The Pavilion supporting MC5.

1970, Janis Joplin started recording sessions recording a version of the Kris Kristofferson and Fred Foster song “Me and Bobby McGee.” Joplin, who was a lover and a friend of Kristofferson’s from the beginning of her career to her death, topped the US singles chart with the song in 1971, making the song the second posthumous number one single in US chart history after “(Sittin’ On) The Dock of the Bay” by Otis Redding.

1978, Joe Negroni from Frankie Lymon and the Teenagers died of a brain hemorrhage. They had the 1956 UK number one and US number six single “Why Do Fools Fall In Love.”

1981, Soft Cell were at number one on the UK singles chart with their electronic version of “Tainted Love.” The song had been a hit for Gloria Jones in 1964. Jones who became Marc Bolan’s girlfriend, was the driver of the car, that crashed and killed Bolan on  September 16, 1977. Jones nearly died in the accident.

1981, Stevie Nicks went to number one on the US album with Bella Donna, featuring the tracks “Stop Draggin’ My Heart Around” with Tom Petty, “Leather and Lace,” with Don Henley, “Edge of Seventeen,” and “After the Glitter Fades.”

1994, Oasis appeared at The Hacienda in Manchester to celebrate the launch of their debut album Definitely Maybe. The album went on to become the fastest selling debut album of all time in the UK and marked the beginning of Oasis’ success in America, selling over one million copies there.

2006, Arctic Monkeys won the UK Mercury Prize for their album Whatever People Say I Am, That’s What I’m Not. The Sheffield-based bands album became the fastest-selling debut in chart history after shifting more than 360,000 copies in its first week of release in Feb 2006.