You are here: Home / Music / Alternative / “Hands Off She’s Mine” by The English Beat 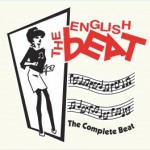 Records don’t get any more downright joyous, infectious and danceable than this classic ska track by The English Beat. They were not to be confused with a now-unknown American band that also went under the name” The Beat” resulting in this band renaming themselves The English Beat in America.

The Beat was a 2-Tone ska collective that consisted of Dave Wakeling, Ranking Roger, Andy Cox, Saxa, David Steele and Everett Morton. They released three essential albums in the early 1980s: I Just Can’t Stop It (1980) where today’s Song of the Day was culled, Wha’ppen (1981) and Special Beat Service (1982) which have now been compiled into a terrific 5-CD box set released by Shout Factory records a few years ago.

The box includes their three studio albums, plus one disc of 12-single mixes and a disc of live recordings from the BBC. They were mostly known on these shores by a clutch of indelible club hits and MTV videos including “Mirror In the Bathroom,” “The Tears Of A Clown,” “Doors Of Your Heart,” “I Confess,” and “Save it For Later,” which was later covered by Pete Townshend. I can remember seeing them in action three nights in a row at a tiny New Jersey club called The Fountain Casino in 1980 with a then-unknown REM as an opening act each night, and can attest to how potent their mix of reggae, ska and soul was on stage.

After they split in 1982, Dave Wakeling went on to form General Public while Andy Cox and David Steele formed Fine Young Cannibals. They now continue to occasionally tour in two different versions of the band…