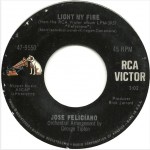 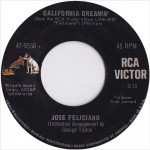 The Doors’ “Light My Fire” topped the US charts in July of 1967, at the height of the Summer of Love. Along with Iron Butterfly’s “In-A-Gadda-Da-Vida,” It became one of the most covered songs by bar bands of the late 1960s.  A year later, the song found its way again on the pop charts peaking at the #3 position as covered by Jose Feliciano as the A-side of today’s single.

Song writer Robby Krieger said in an interview about the cover: “It’s really a great feeling to have written a classic. I think I owe a big debt to Jose Feliciano because he is actually the one, when he did it, everybody started doing it. He did a whole different arrangement on it.” (Wikipedia – James, Gary (1994). “Interview With Robby Krieger”. Classic Bands. Retrieved January 18, 2011.) Feliciano’s version won two 1969 Grammy Awards, for Best Male Pop Vocal Performance and Best New Artist and firmly established him with the American record buying public.

The flip of today’s single is Feliciano’s take on The Mamas & Papas’ “California Dreamin’.” The also song made the rounds as another one of the most covered of its era including versions by Wes Montgomery, The Carpenters, The Four Tops, Melanie, Bobby Womack, Hugh Masekela, The Seekers, Raquel Welch, The Beach Boys , Wilson Phillips, and it still gets regularly licensed for use in film and commercials today.

Puerto Rican born Jose Feliciano was permanently blind from his birth in 1945. As a child he learned to play guitar at an early age and was influenced by classical guitarist Andres Segovia, jazz guitarist Wes Montgomery and Ray Charles for his vocal skills.

Feliciano came up from the same fertile Greenwich Village folk ground as Bob Dylan, Fred Neil, John Sebastian and Joan Baez, and he signed with RCA Victor Records in 1964 to begin his long and legendary recording career. He was a virtuoso Latin guitarist whose early records ran the gamut from traditional Latin tunes and pop hits of the day performed in a crossover folk, pop, jazz and soul bag.

By 1967, Feliciano relocated to Los Angeles. He was already a household name in Latin America and RCA teamed him up with producer Rick Jarrod who had worked with Jefferson Airplane and Harry Nilsson to record the both sides of today’s classic single and the 1968 album Feliciano!

The album is one of the quintessential albums of the late sixties and features near definitive versions of often covered sixties classics including Gerry & The Pacemakers’ “Don’t Let The Sun Catch Your Crying,” Bacharach & David’s “Always Something There To Remind Me,” Bobby Hebb’s “Sunny,” Tom Paxton’s “The Last Thing On My Mind” and of course the requisite Beatles covers “In My Life,” “And I Love Her,” and “Here, There And Everywhere.”

By 1968, Feliciano’s superstardom from the Grammys, hit records and numerous TV appearances was short lived.  Feliciano’s star fell quickly after performing an impassioned and very personal performance of “The Star Spangled Banner” before Game 5 of the 1968 World Series which proved very controversial to many Middle Americans who were never exposed to Latin music. As a result, radio stations stopped playing his records for several years after.

After scoring a surprise hit with his self-penned Christmas classic “Feliz Navidad” in 1970, his career seemed to stall in America, however he has constantly continued to be a strong draw in Latin American countries. During the 1960s and 1970s, he appeared on dozens of TV variety and came back in 1976 with his hit theme from the TV show Chico and the Man. He also composed music for the 1970s TV shows McMillan & Wife and Kung Fu.

Feliciano is a perennial of the summer shed circuit and continues to perform around the world today. His “Feliz Navidad” has become a regularly played as a Christmas holiday staple during the last months of every year. His latest release is a tribute album to Elvis Presley released in 2012 on the Select-O-Hit record label called The King.