You are here: Home / Music / British Invasion / Song of the Day – “I Was Kaiser Bill’s Batman” by Whistling Jack Smith 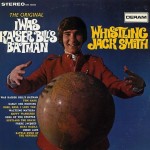 Actually, no. Then who was Whistling Jack Smith, and why is his sole hit from 1967 haunting me?

I played an album of British Invasion hits released on the Parrot Record label from the late ‘60s before I went to work this morning. When this song came on, my ears quickly perked up. Although I recognized the recording, I hadn’t heard it in years and didn’t even know who it was or what it was called. Ever since then, this little ear worm has ceased to leave me alone.

The song was initially titled “Too Much Birdseed” and was written by Roger Cook and Roger Greenway. It was renamed “I Was Kaiser Bill’s Batman” and was recorded by Whistling Jack Smith (a play on the name of 1920s singer “Whispering” Jack Smith). Cook and Greenaway went on to greater fame as the songwriters of the Hollies’ smash hit “Long Cool Woman in a Black Dress.”

The actual whistler on the record was alleged to be trumpeter John O’Neill. O’Neill was known for famously provided the whistling on Ennio Morricone’s theme to The Good, The Bad and The Ugly, as well as for singing the theme to the TV show, Wagon Train under the name Johnny O’Neill. I say allegedly because it is also believed that Noel Walker, who was a record producer for the British Deram record label, was the guy who did the actual whistling on the record. Nevertheless, no one seems to really want to cop to the deed, so let’s just move on.

So we don’t really know who did the actual whistling on the record, but we do know that the smiling guy on the cover of the sole Whistling Jack Smith album was Billy Moeller. Moeller went by the stage name of Coby Wells, and it is he who lip-synched (or whistle-synched) the song on this clip from the TV show The Beat Club. Moeller was also a roadie for British one-hit-wonders, Unit 4+2 who scored a hit on these shores with “Concrete And Clay” in 1965. His brother, Tommy was also a member of the group.

To further confuse things, the Batman of the song’s title is not the comic strip character, but rather is the term the British use for a military valet.

Upon its release, the single shot up to number 20 on the Billboard charts in America. Although four additional singles and an LP were released under the name of Whistling Jack Smith, nothing was ever heard from him again.