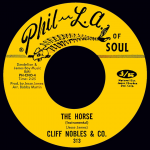 Song of the Day by Eric Berman – “The Horse” by Cliff Nobles & Co.

Cliff Nobles was a gospel singer from Alabama who relocated to Philadelphia to break into the recording industry. He was quickly signed to Atlantic records where he recorded three singles: “My Love Is Getting Stronger,” “Let’s Have A Good Time” and “Your Love Is All I Need” that failed to find any action on the charts.

As a result of his affiliation with Atlantic, he was signed to a local Philadelphia record label called “Phil-L.A. of Soul Records” by independent producer Jesse James and formed the group Cliff Nobles & Co. consisting of Benny Williams on bass, Bobby Tucker on guitar, and Tommy Soul on drums.

The group’s second single was “Love Is All Right” b/w “The Horse.” The single didn’t feature the playing of Nobles regular band but, instead, featured a group of Philadelphia session musicians put together by Leon Huff called the James Boys who went on to become the Sigma Sound house band MFSB.

The song began to climb the charts, peaking at #2 on both the Hot 100 and R&B charts in July of 1968, and went on to sell a million copies. Once the song began to ignite a nationwide dance craze, Nobles went back into the studio and recorded a new vocal track outlying the dance moves to the song. The label released the album The Horse and several instrumental follow-up singles all credited to Cliff Nobles & Co. in which Cliff Nobles was nowhere to be heard.

After his music career was over, Nobles worked in construction and later in the electricity generation industry. He died in Norristown, Pennsylvania in October 2008, at the age of 67, leaving behind this indelible and instantly recognizable instrumental classic.