You are here: Home / Music / Classic Rock / Song of the Day – “Circle Sky” by The Monkees 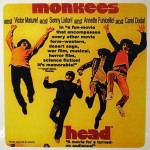 Right from the beginning, it was always intended that The Monkees would make the jump from the small screen to the big screen. However, by 1968 when the group made their debut film Head, The Monkees’ TV show had been cancelled and they were in dire need of some credibility in the music world.

Enter film maker Bob Rafelson and an up-and-coming actor named Jack Nicholson who wrote and directed a film that made Frank Zappa’s 200 Motels look positively coherent in comparison. Head is a psychedelic mess in the first degree…but an interesting one interspersing drug-induced visuals with graphic scenes of war…and, of course, The Monkees.

The Head album had some fine songs on it sprinkled with sound collages that made it an uneven listening experience. Today’s Song of the Day by Eric Berman is one of Mike Nesmith’s finest songs which also served as the centerpiece performance of the film.

The Head album was expertly expanded into a 3 CD box set by Andrew Sandoval and Rhino Handmade several years ago…it’s not for the casual fan for sure…but if you are a Monkees obsessive it’s well worth the price of admission.