You are here: Home / Music / Classic Rock / Song of the Day by Eric Berman – “Can’t You Hear Me Knockin’” by The Rolling Stones 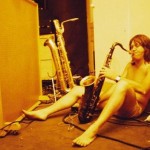