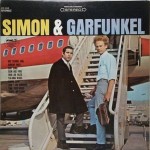 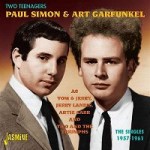 Their first professional recording was the Paul Simon original, “Hey Schoolgirl,” backed with today’s Song Of The Day by Eric Berman, “Dancin’ Wild,” which they recorded for Sid Prosen’s Big Record label. The single climbed up to #49 on the charts on the strength of its A-side, and sold 100,000 copies. Despite an appearance on American Bandstand, subsequent recordings for MGM, Warwick and Laurie Records, under various names, failed to chart. After high school, Simon attended Queens College and Garfunkel went to Columbia University.

My first contact with the early Tom & Jerry recordings was from a “Simon & Garfunkel” album released by Pickwick Records back in the mid-1960s. My parents purchased it for me thinking it was one of their real releases, only for us to all be disappointed by the early rock ‘n’ roll recordings we heard on the record. Over time, I’ve come to appreciate the innocence of these recordings and their unique place in music history. A few years ago, Jasmine Records in England released the Two Teenagers compilation featuring the duo’s complete recordings from 1957 through 1961.