You are here: Home / Music / Alternative / Song Of The Day by Eric Berman – “Eye Know” by De La Soul 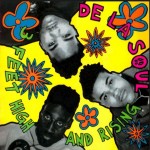 With samples from Otis Redding’s “(Sittin’ On) The Dock Of The Bay” and Steely Dan’s “Peg,” De La Soul unleashed this bouillabaisse of good times onto a hip-hop public in 1989 with today’s Song Of the Day by Eric Berman. The 3 Feet High And Rising album is one of two stone-cold sample-delic masterpieces that came out that year along with The Beastie Boys’ classic Paul’s Boutique, and they both sound as fresh today as they did when they were newly minted.

I was fortunate enough to see them perform shortly after the album’s release during the New Music Seminar in New York City opening for none other than George Clinton and the P-Funk All-stars. Not only was it a very late evening of music with the funksters doing their usual for then four hour set, but it was very memorable even after all these years.