You are here: Home / Music / Alternative / Song Of The Day by Eric Berman – “Fight The Power” by Public Enemy 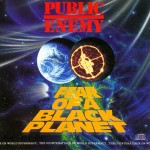 This track is ground zero in all of hip hop and perhaps the most in your face rap single of all time! While Public Enemy are no doubt the most influential rap group of all time, they were also the most innovative with their sampling and dynamic backing tracks provided by brothers Hank and Keith Shocklee, also known as The Bomb Squad.

The Shocklee brothers had their own mobile DJ business called Spectrum City DJs who also counted Professor Griff amongst its employees. Carlton Ridenhour, also known as Chuck D, was an aspiring graphic designer who offered to design some posters for the Spectrum City crew while he was a radio DJ at WBAU, the Adelphi College radio station. At one point, he also told them he could emcee, and along with another WBAU regular, Flavor Flav (William Drayton Jr.), and local DJ, Terminator X (Norman Rogers), Public Enemy was born.

Right from the start, PE’s sound was a mix of the serious brought out by Chuck D’s politically charged topical messages cooled off by the somewhat slacker presence of D’s amiable sidekick Flavor Flav, all supported by the hyper-charged backing tracks of The Bomb Squad.

It was through WBAU program director Bill Stephney that they came to the attention of producer Rick Rubin who signed them to his Def Jam record label and released their first album Yo! Bum Rush The Show in 1987. The group followed that record with the earth shattering It Takes A Nation Of Millions To Hold Us Back, which was the first rap album to top the Village Voice’s Pazz and Jop Poll in 1988.

This song comes from their no less essential third release Fear Of A Black Planet from 1990 and it later turned up as the centerpiece of the “Spike Lee joint” Do The Right Thing. Other singles on this album included “Welcome To The Terrordome” and “911 Is A Joke” in which, Flavor Flav and company take on the response times of 911 in black neighborhoods.