You are here: Home / Music / Classic Rock / Song Of The Day by Eric Berman – “Graduation Day” by The Beach Boys 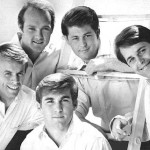 The Four Freshman took this song to the top twenty back in 1956 and the Wilson brothers were listening. And while The Beach Boys certainly were influenced by the Freshmen, the Freshmen were in turn influenced by vocal groups of the Big Band Era like The Pied Pipers and The Modernaires, as well as the close harmonies employed by numerous Barbershop Quartets that came before them. The song celebrates a rite of passage that many are embarking upon as we speak. I was torn between choosing this vocal group gem, or to let it all hang out and go with “School’s Out” by Alice Cooper.