You are here: Home / Music / Alternative / Song Of The Day by Eric Berman – “Head Over Heels” by Tears For Fears 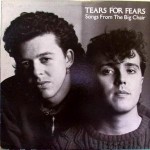 There never was a “sophomore slump” for the duo of Roland Orzabel and Curt Smith, the ‘80s synth-pop duo better known to the world as Tears For Fears. While The Hurting, their debut album topped the charts in their native UK, it was their second album Songs From The Big Chair that did the trick around the rest of the world.

The album’s title was a reference to Sybil , a TV movie that told the story of a child with multiple personality disorder who sought solace in the big chair of her psychiatrist’s office. Chair was a multi-platinum success that spawned several hit singles including the two U.S. chart-toppers “Shout” and “Everybody Wants To Rule The World,” plus “Mother’s Talk” and today’s Song Of The Day and the albums best and most melodic track.

The duo stayed together for one more album, the Beatle-esque The Seeds Of Love (featuring the huge hit “Sowing The Seeds Of Love”) before calling it quits, although Orzabel continued to release albums under the Tears For Fears moniker well into the 1990s.

The second version of Tears For Fears, featuring Alan Griffiths and Tim Palmer, released several albums that did well overseas, but tanked in the states. The duo reunited and released the much underrated Everybody Loves A Happy Ending album in 2005, and joined Spandau Ballet on the road for a tour in 2010. The production values of the mid-1980s (tinny electronic drum sounds, overpowering synth washes) have rendered some of their music somewhat dated, but the current Synth Pop revival led by groups like Divine Fits and STRFKR has happily led me to rediscover some of the music of the era, and enjoy it anew.