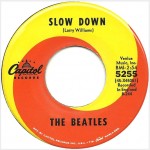 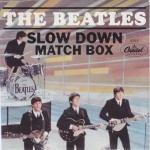 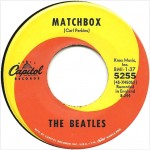 The Beatles not only had three of the greatest songwriters of all time in their band, but early on they were also great tastemakers, choosing unknown American R&B, Country, Blues and Rock ‘n’ Roll tunes and repurposing them for the UK market. As a result of their world domination of the music charts, they pretty much reintroduced songs like “Please Mr. Postman,” “Rock And Roll Music,” “Anna,” “Act Naturally,” “Baby It’s You,” “You Really Got A Hold On Me,” “Money (That’s What I Want),” “Honey Don’t,” “Long Tall Sally,” “A Taste Of Honey,” “Roll Over Beethoven,” “Devil In Her Heart” and even a Broadway tune “Till There Was You” to the American market.

Today’s jukebox classic features two such cover records, although I have taken some liberties and flipped the single in the juke to make the B-side of the single, the A-side instead. Both of today’s songs originally appeared on the British Long Tall Sally EP released in 1964.

“Slow Down” is a cover of a Larry Williams tune from 1958. The Beatles probably first heard it as the flip side of Williams’ single “Dizzy Miss Lizzy” which they also covered. The Beatles would also return to Larry Williams’ cannon of material for a third time to record his song “Bad Boy.” Williams was a New Orleans R&B recording artist who was far more influential across the pond than here in the U.S., which is probably why The Beatles covered three of his songs.

The song has also seen covers by The Young Rascals, The Flamin’ Groovies, The Jam, Led Zeppelin, Golden Earring, Tom Jones, Elvis Costello and many others. Today, The Beatles’ recording can be found on the compilation album Past Masters Vol. 1 and also on the first Live At The BBC album.

The other side of today’s single is one of three Carl Perkins songs that the Beatles recorded. (“Honey Don’t” and “Everybody’s Tryin’ To Be My Baby” were the other two.) The song was first recorded by Blind Lemon Jefferson in 1927, but The Beatles based their version of “Matchbox” on Carl Perkins’ 1956 single version released on the Sun record label.

The Beatles began performing the song as early as 1961 with Pete Best handling the vocal chores. The group continued to perform the song and live versions have turned up from The Star Club in Hamburg, Germany featuring Lennon on vocals. By the time the group got around to performing the song for BBC radio (as heard on the Live At The BBC album), Ringo was featured on vocals. The song later turned up on The Beatles’ Long Tall Sally EP in England, and on the Something New album in America also with Ringo on the vocals.

The Beatles’ recording of “Matchbox” was issued as the A-side of today’s single in a nice picture sleeve and climbed to number 17 on the pop charts. Today, it also can be found on The Beatles’ Past Masters Volume 1 album. For the studio recording, the group was augmented by George Martin who played piano on the track.