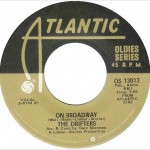 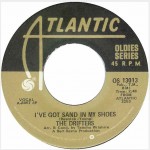 It was one of the greatest songs to emanate from the Brill Building in New York City, and it was recorded by one of the greatest R&B groups of all time, The Drifters. “On Broadway” was written by Barry Mann and Cynthia Weil, with an assist from Jerry Lieber and Mike Stoller, four of the most hit-laden songwriters to come out of the hallowed halls of the Brill Building. The story behind the song’s inception exemplifies the creative and collaborative spirit of the writers who were also very much in competition with each other.

The Brill Building sound actually came from two buildings. There was the actual Brill Building at 1619 Broadway where Lieber and Stoller had their offices, and there were the offices of Aldon Music which were housed at 1650 Broadway. Weil and Mann worked at Aldon Music and originally recorded versions of “On Broadway” with The Cookies and The Crystals. Lieber and Stoller, who were housed at 1650 Broadway had booked a recording session the day after The Cookies’ session in the same studio and put word out that they were still looking for one more song for The Drifters to record. Weil and Mann forwarded “On Broadway” to Lieber and Stoller who liked it, but wanted to make some changes. An all-night writing session ensued with all four songwriters, culminating in a simpler rhythm and different lyrics.

Cynthia Weil: “We originally wrote “On Broadway” for a group called The Cookies. Our friends Carole King and Gerry Goffin were writing for them and Gerry was producing and they were short one song. Barry had this concept of writing a “Gershwinesque” pop song and I, being a Broadway fanatic wanted to write a lyric about my favorite street and all it stood for. The ideas seemed to mesh so we wrote the first version of “On Broadway.” The Cookies and later The Crystals cut it but neither record was released. Then our publisher told us that Jerry Lieber and Mike Stoller were looking for songs for The Drifters. We played them our song and they thought we needed to make some changes for their group. They said we could go home and work on it or rewrite it with them. We idolized them and jumped at the chance to team up. Using the basic melody that Barry had written and my opening lines all we created the “On Broadway” that went on to be a hit by The Drifters and George Benson.” (Barry Mann/Cynthia Weil Website – http://www.mann-weil.com)

The Drifters had an ever-changing lineup (hence the group’s name) that included three main lead vocalists in succession. Their original lead vocalist was Clyde McPhatter who was with the group for one year and sang on the hits “Such A Night,” “Money Honey,” “Lucille” and “Honey Love.” The second main incarnation of the group featured Ben E. King who sang on the hits “There Goes My Baby,” “Dance With Me,” “This Magic Moment,” “I Count The Tears” and “Save The Last Dance For Me.”  After King’s departure for a solo career, Rudy Lewis came on board and lent his golden tones to “Some Kind Of Wonderful,” “Up On The Roof” and today’s jukebox classic.  Lewis was with the group from 1961 until his untimely death in 1964.

The musicians on the track included Phil Spector who played the guitar solo, Joe Newman and Ernie Royal on trumpet, Billy Butler, Bill Suyker and Everett Barksdale on guitar, Russ Savakus on Bass, Gary Chester on Drums and Phil Kraus, Nick Rodriguez and Martin Grupp on percussion. The song appeared on the group’s 1964 album Under The Boardwalk which featured Rudy Lewis’ last recordings with the group before his death, and the emergence of their next lead singer Johnny Moore, who had been McPhatter’s temporary successor in the 1955 incarnation of the group. (The numerous lineup changes within The Drifters are confusing to say the least and I won’t delve much farther into this here.)

The song reached the #9 position on the pop charts in 1963 and it was covered by George Benson, whose smooth jazz rendition brought it back to the top ten of the charts in 1978. The song also saw covers by The Coasters, The Dave Clark Five, Eric Carmen, Bobby Darin, Tom Jones, Johnny Mathis, James Taylor, Gary Numan, Tito Puente, Lou Rawls, Neil Young, Buddy Rich, Frank Sinatra and Sly & The Family Stone. Both David Bowie and Genesis quoted the melody and lyrics of this ever popular favorite in their respective songs “Aladdin Sane” and “The Lamb Lies Down On Broadway.”

The flip of today’s single is “I’ve Got Sand In My Shoes” which was written by Kenny Young and Arthur Resnick who also wrote “Under The Boardwalk.” This sequel is strongly reminiscent of “Under The Boardwalk,” and just as good, to boot! It’s got a great guitar line at the front of the tune, and it appeared on The Drifters’ 1965 album I’ll Take You Where The Music’s Playing. The personnel on the track included Johnny Moore on lead vocals, Charles Thomas on tenor vocals, Eugene Pearson on baritone vocals, John Terry on bass vocals and Billy Davis on guitar. The album was the first Drifters record to be released after the death of Rudy Lewis.