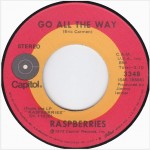 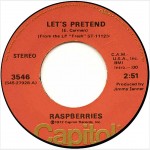 Power pop never came more powerful, and yes, more poppy than today’s jukebox classic “Go All The Way” by Raspberries. And if there ever was a song that summed up the sound of ‘70s AM radio, this is the track with its crunchy guitar riff designed to instantly get your attention, and its soaring, stacked Beach Boy-inspired harmonies that pretty much paved the way for groups like Electric Light Orchestra and Queen. Over their five year existence, Raspberries pretty much invented their own brand of ultra-melodic rock with indelible singles like “Go All The Way,” “I Wanna Be With You,” “Let’s Pretend” and “Overnight Sensation (Hit Record).”

Like many groups from the 1970s, Raspberries were inspired by The Beatles, even going as far as wearing matching suits early on. While the repeated “come on” chants in today’s song paid homage to the fabs’ first single “Please Please Me,” the lyrics were inspired by The Rolling Stones’ performance of “Let’s Spend The Night Together” on The Ed Sullivan Show when the band had to change the song’s lyrics to “let’s spend some time together.”  Carmen: “I knew then that I wanted to write a song with an explicitly sexual lyric that the kids would instantly get but the powers that be couldn’t pin me down for.” (Blender Magazine) As a result, the song was banned by the BBC in England for its suggestive lyrics.

Carmen: “I remember ‘Go All The Way’ vividly. The year was 1971. I was 21. I had been studying for years. I had spent my youth with my head between two stereo speakers listening to The Byrds and The Beatles and later on The Beach Boys – just trying to figure out what combinations of things…I must have worn out 10 copies of that first Byrds album listening to it over and over, and turning off the left side and turning on the right side trying to figure out why these certain combinations of instruments and echo and harmonies made that hair on your arms stand up. I did the same thing with Beatles records, and I tried to learn construction. Then I went to school on Brian Wilson. That was a real breakthrough for me because he was doing things that I thought were so incredibly sophisticated before anybody was doing anything even close. The Pet Sounds album is, to me, the best pop album of all time…So when I sat down to write ‘Go All The Way,’ there were a couple things I had in mind. I thought, ‘What part of the song is it that people really want to hear? It’s the chorus.’ As a result of all that, ‘Go All The Way’ has a 10 second verse, and then the chorus is a minute long. I figured just to get to the chorus as fast as I can. That was the plan behind the song. I repeated that when I wrote ‘I Wanna Be With You.'” (EricCarmen.com)

The group formed in the early 1970 in Cleveland, Ohio and consisted of Eric Carmen on vocals and bass, Wally Bryson on guitar, Dave Smalley on guitar and Jim Bonfanti on drums. While trying to come up with a moniker for the band, one of the members responded to a suggestion he didn’t like by saying “ahh, raspberries,” hence their name.

They signed with Capitol records in 1971 and were teamed with producer Jimmy Ienner who helmed all four of their albums. After they broke big with “Go All The Way” which climbed to #5 on the pop charts in 1972, Smalley and Carmen switched instruments so Carmen could be the front man on stage. The song was included on their stellar self-titled debut album which came with a scratch and sniff sticker on its cover. After all these years, the sticker on my copy still carries a hint of raspberry essence. The song has been covered  as a duet by Matthew Sweet and Susanna Hoffs and also by The Killers.

The flip of today’s double A-sided reissue single is “Let’s Pretend,” another prime example of the Beach Boys-inspired pop that was Raspberries’ stock in trade. The song was the second single charting at #35 from their second album, Fresh.

With the acrimonious breakup of Raspberries in 1975, producer Jimmy Ienner brought Carmen to the fledgling Arista record label where, under the aegis of Clive Davis, he took on a more baroque ballad style. Carmen hit the ball right out of the park with the first single from his self-titled debut album, “All By Myself,” which went all the way to the number two position on the charts.

After Carmen’s second Arista album, the hits began to dry up. However, he continued to have hits via others covering his songs like Olivia Newton John, Samantha Sang and Mike Reno and Ann Wilson, whose “Almost Paradise” from the movie Footloose was a huge hit in 1984.  Carmen returned to the top ten again in 1987 with his singles “Hungry Eyes” and “Make Me Lose Control,” from the movie Dirty Dancing. The original lineup of the group reunited for a tour in 2005. Let’s hope they “go all the way” and do it again soon.