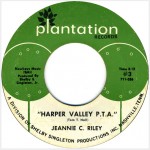 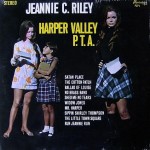 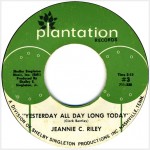 Today’s jukebox classic goes out to all of those “Harper Valley hypocrites” who scorn mini-skirts, casual sex and social drinking.

Jeannie C. Riley’s recording of “Harper Valley P.T.A.” sold six million copies worldwide in 1968 and catapulted her to instant notoriety, earning her a Grammy Award for Best Female Country Vocal Performance and the Country Music Association Single of the Year award.  The Tom T. Hall-written ditty topped both the Country and Pop charts in 1968, a feat that would not be repeated by a song until Dolly Parton did the trick with “9 To 5″ in 1981.

Jeannie C. Riley had been a receptionist at Passkey Music on Music Row in Nashville before recording the song. She came to the attention of Plantation Records chief Shelby Singleton from a demo she recorded called “Old Town Drunk.”  Singleton thought that Riley would be perfect for another demo he was sitting on called “Harper Valley P.T.A.” written by a then-unknown Tom T. Hall.

The song was literally recorded in 15 minutes right after Riley left work at Passkey and walked into the studio that just happened to be next door. After it was recorded, it was suggested that Riley change the song’s final line from “the day that momma broke up the Harper Valley P.T.A.” to “the day my momma socked it to, the Harper Valley P.T.A.” The line sealed the deal on the song, as well as Jeannie C. Riley’s fate as the notorious vixen of Harper Valley.

Before the song got to Riley, it was originally given to Skeeter Davis who passed on it. In the meantime Billie Jo Spears and Margie Singleton also recorded versions of the song, but Riley’s recording not only topped the charts, but gave her a TV variety show of her own to star in. Later, it was turned into a 1978 major motion picture and a 1981 TV series, both starring Barbara Eden.

While Riley went on to have hit records with “The Girl Most Likely,” “There Never Was A Time,” “The Rib,” “The Back Side of Dallas,” “Country Girl,” “Oh Singer” and “Good Enough to Be Your Wife,” she will always be remembered by today’s Song Of The Day.

The flip of today’s single is a Clark Bentley-penned tune that was featured on her 1970 album, Country Girl.