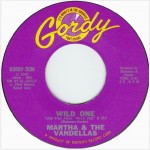 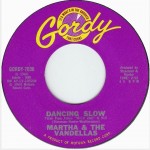 Today’s Song Of the Day is the second single in the jukebox by Martha Reeves and the Vandellas. As a result, I will pick up some of the biographical information I wrote about the group from my piece on “Jimmy Mack” (Jukebox Series #23) for this article.

Martha and the Vandellas was one of the most successful girl groups to come out of Motown. Unlike The Supremes, the Vandellas’ sound was far grittier and more danceable than the sugary pop that catapulted The Supremes to fame. Their list of classic hits includes “(Love Is Like a) Heat Wave,” “Nowhere to Run,” “Come And Get These Memories,” “Quicksand,” “Live Wire,” “Jimmy Mack,” “My Baby Loves Me,”  “You’ve Been In Love Too Long,” and their signature single “Dancing in the Street.”

Today’s jukebox classic was not one of Martha and the Vandellas’ biggest hits, but it is one that has a distinctive uptown Brill Building sound to it, by way of Detroit. The song was written by William “Mickey” Stevenson and Ivy Jo Hunter who also were two of the three songwriters of the group’s defining hit “Dancing In The Street.” In fact, the backing track to this song was an alternate version of the backing track to “Dancing In The Street,” with the crucial difference of a heavily boosted drum track that sends the record into the dance floor stratosphere.

The song climbed to #11 on the R&B charts, but only placed at #34 on the Hot 100 singles chart. However, don’t let the somewhat anemic chart stats fool you; this song is every bit as potent as their biggest hits with its larger than life drum sound, tinny AM radio horn charts, and of course the sultry vocal talents of Martha Reeves. The song was a tribute to bikers and was inspired by The Shangri-Las’ “Leader Of The Pack” and The Crystals’ “He’s A Rebel.”

The song was included on The Vandellas’ 1965 Dance Party album, as was the flip of today’s jukebox classic “Dancing Slow.” The album centered on a clutch of singles that were released during the previous year including the hits “Dancing In The Street” and “Come And Get These Memories,” plus the popular album track “Motoring.”

The flip of today’s single, “Dancing Slow” was a supper club ballad that was supposed to cast Martha Reeves in a new light as a nightclub performer. Around this time, Diana Ross and The Supremes scored three consecutive chart-topping singles, so Motown did not want The Vandellas’ to compete on the charts with the label’s new superstar group (even though Martha Reeves could sing circles around Diana Ross). As a result, the group was sent to the studio during the summer of 1964 to record a selection of MOR pop ballads, Broadway tunes and standards for a supper club album that never saw the light of day. Ultimately, The Supremes went on to become Motown’s biggest recording act, pushing Martha and the Vandellas to the side and off the label.

2020 and 2019: Thanks to everyone who continues to support us. The current licensing to legally play all the music you hear on Acid Flashback costs almost $2000 a year. Please help us defray this and other costs with a donation of any amount. … END_OF_DOCUMENT_TOKEN_TO_BE_REPLACED