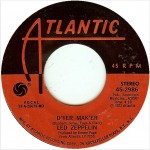 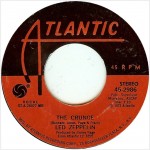 I jumped onto the Led Zeppelin bandwagon after the release of Led Zeppelin IV (Zoso) and the single “Stairway To Heaven” in 1972 when I was eleven years old. You couldn’t escape “Stairway” on FM radio and, at the time, I had no notion that they had existed before that record. With further investigation, I came to discover the three records before Led Zeppelin IV, although that came much later.

So when the mighty Zeppelin (Robert Plant, Jimmy Page, John Paul Jones and John Bonham) delivered their fifth album Houses Of The Holy in 1973, I was firmly in their camp as a fan as was most of my peer group.  But for older, long-time fans of the band, the release of Houses was met with much derision and whisperings of selling out due to the album’s first single “Dancing Days,” which was the most radio-friendly track the band had ever released. When fans began playing the record, they found several other tracks to gripe about including today’s jukebox classic and second single from the album, “D’yer Mak’er” backed with “The Crunge,” which really made the die-hard rockin’ blues-based Zep fans really cry foul.

“D’yer Mak’er” is an awkward hybrid of reggae and doo wop that is loaded with charm, a term seldom used to describe Led Zeppelin, and an attribute that Led Zep fans didn’t find to their liking. Jimmy Page: “I didn’t expect people not to get it. I thought it was pretty obvious. The song itself was a cross between reggae and a ’50s number, “Poor Little Fool,” Ben E. King’s things, stuff like that.” (Schulps, Dave (October 1977). “Interview with Jimmy Page”. Trouser Press via Wikipedia)

It was one of the few in the Zeppelin catalog where all four members of the band shared writing credits since it sprang forth from a studio jam. The band was never serious about the track as it was initially conceived as a joke, and bassist John Paul Jones went out of his way on numerous occasions to let it be known that he never liked the song. As a result, it was never performed in its entirety by the band in concert, although it did occasionally feature in the medley of tunes the band would incorporate into “Whole Lotta Love” on stage. That said, it was a commercial track and Atlantic Records in America chose to release it as a single which climbed to #20 on the charts.

The title of the song has several meanings including a slang for the phrase “Did you make her” which loosely translates to did you get to have sex with her. Another interpretation of the title was derived from an old Jamaican joke that went like this: “My wife’s gone to the Caribbean.” “Jamaica?” (which in Jamaican patois is pronounced “D’you make her?”) “No, she went down on her own.” Yuk, yuk, yuk…Ba-da, bum!

The flip of today’s single finds the mighty Zep tapping into their inner James Brown with aplomb on an ultra-funky workout that evolved out of another studio jam session.  It is one of the greatest recordings the band ever committed to vinyl showing off just how tight they were while capturing a jerky groove with ever-changing time signatures. It is also one of John Paul Jones’ favorite Zeppelin recordings.

The song pays homage to James Brown with it’s ending line, “Where’s that confounded bridge?” The line is a reference to James Brown’s penchant for recording live in the studio and shouting out orders to the band on the fly, including “Take it to the bridge.” Since “The Crunge” doesn’t have a bridge, the line grinds the song to an abrupt halt. Additionally, the lyrics “Ain’t gonna call me Mr. Pitiful, no I don’t need no respect from nobody,” pay tribute to Otis Redding’s recordings of “Mr. Pitiful” and Aretha Franklin’s “Respect.”