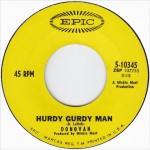 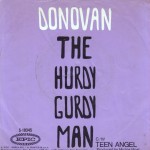 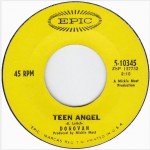 “The Jukebox Series” focused on the 80 records that currently inhabit my 1963 Seeburg LPC1 jukebox. I’ve had my jukebox (or as I like to call it “the prehistoric iPod”) for a little over twelve years and in that time I’d like to think that I’ve perfected the mix of 45s within. Over the years, records have come and gone out of the ranks of the juke, but they were all at one time juke-worthy. I’ve decided to expand “The Jukebox Series” to include many of the “juke worthy” records that are no longer currently in the mix, but at one time inhabited a coveted slot.

If Donovan’s vibrato hum at the top of this track doesn’t gain your attention from the get-go, then you will certainly be sold down the road by the time the guitar solo grabs you by the nads. And who exactly is the mystery axe man on this track anyway?

A hurdy gurdy is a stringed instrument that produces sound by turning a crank attached to a rosined wheel, acting like a violin bow on top of strings. The instrument gained popularity during the Renaissance era and again became famous with musicians known as organ grinders who roamed the streets of London during the 1800s.

Donovan composed today’s jukebox classic in 1968 for a band called Hurdy Gurdy that included his friend and guitar mentor Mac MacLeod. Donovan had intended to produce the song for the group, but creative differences led to Donovan committing the song to tape himself affording him another top five single in 1968. The song does not include a hurdy gurdy in its instrumentation.

“Hurdy Gurdy Man” was recorded in early 1968 and the session (according to the liner notes of the Troubadour box set) featured Donovan on vocals, acoustic guitar and tamboura, Alan Parker and Jimmy Page on electric guitar, John Paul Jones on bass and John Bonham and Clem Cattini on drums. If the personnel listing is accurate (more on this later), this song gave us three-fourths of Led Zeppelin before there even was a Led Zeppelin.

However, exactly who played the ultimate guitar solo on the track is still in question.  According to Jones, it was Alan Parker who played the blistering guitar solo (and Bonham wasn’t on the session at all), but Donovan remembers it differently with Page performing the axe chores. Nevertheless, Donovan originally planned for Jimi Hendrix to play the guitar solo, but he was not available for the session.

Jimmy Page weighed in on the situation in the liner notes to the 2005 reissue of The Hurdy Gurdy album: “I know it’s rumored that I played on that, but I didn’t – and the most bizarre part about this whole story I heard about this story actually when I was in USA, it was about the time we were talking about the deal with Led Zeppelin. We were at Miami with Jerry Wexler. And I heard about the story by there and then, across from England, and on the shores over here. And what the story was – and it’s very true. That they had Jeff Beck go in, and Jeff Beck played on it, and the producer decided to wipe the track. And Donovan had asked for me to do it, but of course I wasn’t there. And they had a guitarist, he basically filled, you know. He went into the session – and I wouldn’t say filled my shoes – but he went in the door, and his name was Alan Parker. I mean, none of you even know of him. It’s not the film producer. But anyway, he’s the guy who played the guitar solo, so you know, as you say, some people might have thought Beck did it, or me, but it was neither of us. But I think it was tragic that Beck got wiped off. That was absolutely crazy. They just decided that they didn’t like what he did. And I mean, perish the thought, you know.”

The song originally had a third verse which was composed by George Harrison while Donovan and Harrison were in Rishikesh, India visiting with the Mahrishi Mahesh Yogi in 1968. Harrison’s verse went as such:  “When the truth gets buried deep / Beneath the thousand years of sleep / Time demands a turn-around / And once again the truth is found / Awakening the Hurdy Gurdy Man / Who comes singing songs of love.”

Donovan: “I was intrigued by the Maharishi Mahesh Yogi’s teachings of transcendental meditation, which were also followed by The Beatles. I went with The Beatles and George’s wife, Pattie Boyd, Cynthia Lennon and Jane Asher to stay with the Maharishi in the Himalayas for 3 months. For a while, Mia Farrow and her sister Prudence, shared the bungalow next to mine. She inspired John Lennon to write “Dear Prudence.” “Hurdy Gurdy Man” was influenced by the sounds I heard there.” (London Daily Mail)

In order to keep the running time of the single below three and a half minutes, producer Micky Most opted for the guitar solo over the third verse. Today, Donovan performs the Harrison verse in concert when he plays the song. The tamboura that Donovan plays on the track was, in fact a gift from George Harrison from when they were both in India.

The song has been covered by the likes of Steve Hillage, The Butthole Surfers, Wild Colonials, L.A. Guns and Howard Stern. The hypnotic flip of today’s single is “Teen Angel” which was recorded during the sessions for the Hurdy Gurdy Man album, but was ultimately relegated to the B-side- of the single.