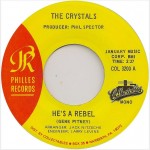 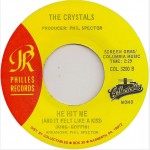 They had a string of hits in the early ‘60s written and produced by the best of what The Brill Building had to offer. There was “Uptown,” written by Barry Mann & Cynthia Weil, the ludicrous “He Hit Me (And It Felt Like A Kiss) (Carole King and Gerry Goffin), “He’s A Rebel” (Gene Pitney), “Da Doo Ron Ron” and “And Then He Kissed Me” (Jeff Barry and Ellie Greenwich), to name but a few.

All of the aforementioned classics were produced by Phil Spector utilizing the Wrecking Crew session musicians to employ his over-the-top “Wall Of Sound” production that sounded best when emanating out of a mono car radio speaker (preferably of early ‘60s vintage).

But who were The Crystals…and did they even perform on all of the records that were credited to them?

The original Crystals consisted of school friends Barbara Alston, Mary Thomas, Dolores “Dee Dee” Kenniebrew, Myrna Girard, Patricia “Patsy” Wright and Dolores “Lala” Brooks (who replaced the pregnant Girard after their first few hits).  This was the group that was featured on the classic single “Uptown.”

Once The Crystals began to tour in support of their hits, Spector began using whoever was available when he was ready to record, resulting in hit records credited to The Crystals that were actually performed by Darlene Love and The Blossoms.

Lala Brooks shared how she first heard today’s jukebox classic with Songfacts.com: “We’re riding in a car, all of us girls going on a gig, and we hear: ‘He’s a rebel and he’ll never never be any good.’, but we don’t think anything of it. At the end, the DJ said, ‘The Crystals, ‘He’s a Rebel.” We looked at each other like, ‘The Crystals? Where did that come from?’ So we were confused.”

The song went on to top the pop charts in spite of New York DJ, Murray the K who sensationalized the story on WINS radio that the Crystals were not the group on the song. On the road, it was business as usual with The Crystals performing the song as if they actually recorded it.

Crystals member Dee Dee Kenniebrew had this to say about the record: “The Crystals’ first hit in the UK was ‘He’s A Rebel,’ but we didn’t sing it. When we rehearsed it we hadn’t particularly liked it. Also, we’d already had two hit records in the States, plus an album, yet we still hadn’t been paid. Phil Spector probably thought we were giving him too much hassle about money, so he got a studio group to record the song. Unfortunately, our first manager didn’t get us a good contract and Spector was able to use the group’s name.” (as told to the Daily Express Saturday Magazine 8/25/07 via Songfacts.com)

The lead vocal on the original single was sung by Darlene Love of The Blossoms who got paid $5000.00 for her session work along with the promise of a future solo single under her own name which took a long time to materialize. Spector recorded Love as the lead vocalist on the single “He’s Sure The Boy I Love,” but ended up releasing the record as a Crystals record without giving her credit. It wasn’t until 1963 that Love finally got her own singles including “Wait Til’ My Bobby Gets Home,” “(Today I Met) The Boy I’m Gonna Marry,” “A Fine Boy” and her signature recording “Christmas (Baby Please Come Home.)”

Darlene Love: “Between ‘He’s A Rebel’ and the Christmas album two years later, The Crystals didn’t sing on any of their own records, they just went out on tour to promote them.” (Record Collector via Songfacts.com) A slightly different version of the original group was soon back on their records until jealousy began to bear its ugly head between them and Spector’s other main protégé’s The Ronettes.

Things got so bad, that The Crystals finally dissolved and Spector used The Ronettes (billed as The Crystals) on several tracks of the album The Crystals Sing Their Greatest Hits. Such was the music business of the early sixties! No matter who was actually in the studio, I think it’s safe to say that The Crystals made a clutch of world-class classics that have stood the test of time.

Phil Spector used the royalties from “He’s A Rebel” to buy out his partners at Philles Records using profits from the next two Crystals singles as collateral. The first single was the aforementioned “He’s Sure the Boy I Love” (recorded by The Blossoms as The Crystals), and the second single was a five minute tune called “(Let’s Do) The Screw.” The song featured Spector’s lawyer saying “do the screw” over and over again. A total of one copy of the 45 was pressed and given to Spector’s partner Lester Sill. The single made no money and received no airplay.

The flip of today’s single is by far the most embarrassing record to come from the pens of Carole King and Gerry Goffin. The song was written after their babysitter, Little Eva (of “The Locomotion” fame) told King and Goffin that her boyfriend beat her on a regular basis, and it proved to her how much he loved her. (Go figure!)

It was a song that garnered little airplay, and even The Crystals didn’t want to record it. Lala Brooks: “That was weird for us. We were thrown aback by the song. I’m a teenager at the time. Barbara (Alston, fellow Crystal) was a little uneasy doing it. And I was trying to figure out the song and why Phil would record something like this. Barbara was so turned off because she was singing the lyrics and can’t feel anything. So in the studio Phil was telling her, ‘Don’t be so relaxed on it.'” (Mojo via Songfacts.com)

Even during the relatively innocent early sixties, this record is totally cringe-worthy. That said, it does have its kitsch value. Where is Quentin Tarentino when you need him…