You are here: Home / Music / Classic Rock / Song of the Day by Eric Berman – “Soldier of Love (Lay Down Your Arms)” by Arthur Alexander 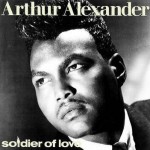 He’s the only artist to be covered by the holy quartet of Elvis Presley, The Beatles, The Rolling Stones and Bob Dylan. Others who rushed to his deep well of first-rate copyrights included The Hollies, Ry Cooder, Pearl Jam, Ike & Tina Turner, Marshall Crenshaw, George Jones, Otis Redding, The Bee Gees, Humble Pie, and Dusty Springfield, and that’s only a small sampling of those who have recorded his tunes.

Yet, Arthur Alexander, the man who wrote such classics as “Anna (Go To Him),” “You Better Move On,” “Sally Sue Brown,” “Detroit City,” “A Shot Of Rhythm And Blues” and today’s Song of the Day by Eric Berman, remains largely unknown to most people, or even worse, totally forgotten.

And if his recordings weren’t enough to guarantee him legendary status, he, along with Donnie Fritts, Rick Hall and Tom Stafford, converted a dilapidated tobacco warehouse in Alabama into a recording studio, and launched the famed Muscle Shoals Studios with his first single “You Better Move On” in the early 1960s.

The music business was a tricky proposition then as it is now, and fame and fortune largely alluded him, but not for lack of trying. After a string of seminal southern soul recordings that made others rich and famous, Alexander moved from record label to record label releasing a series of albums and singles throughout the sixties and seventies that garnered little or no airplay, including an eponymously titled album for Warner Brothers in 1972 and the 1975 minor hit single “Every Day I Have To Cry” for the Buddah label.

From 1977 through 1992, Alexander dropped out of the music industry completely and drove a van for senior citizens. After being inducted into the Alabama Music Hall of Fame, he came back to music and recorded his last record, Lonely Just like Me for Elektra records in 1993. Sadly days after launching his comeback with a new band, Alexander died of a heart attack.

For further listening, check out The Ultimate Arthur Alexander for his original recordings, and the tribute album Adios Amigo: A Tribute to Arthur Alexander featuring covers of his songs by the likes of Robert Plant, Elvis Costello, Roger McGuinn, Nick Lowe, John Prine and Frank Black. Both CDs were issued by Razor & Tie music and are essential.