You are here: Home / Music / Classic Rock / Song of the Day by Eric Berman – “I Got Loaded” by Little Bob and the Lollipops 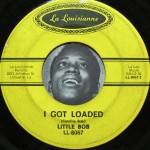 For many years, I thought this song was a Los Lobos original. Their version was so in line with their sound and it fit so well on their Will the Wolf Survive album. So it was surprising to me, when I found out that the song had been around for over twenty years by the time they got around to recording it.

The song was recorded by Little Bob and the Lollipops, and was never even originally released as the A-side to the single it appeared on. When originally released in 1965 on the La Louisianne record label (best known for Bob and Dale’s hit “I’m Leaving It All Up to You”), it was the flip of the single “Nobody But You.” Over the years, the song has become Little Bob’s signature song and has inspired covers by the likes of Robert Cray, Tab Benoit and The Refreshments.

Little Bob (born Camille Bob) grew up working on a farm in rural Prairie Laurent, Louisiana. Early on he took a liking to the music of B.B. King, Count Basie and Guitar Slim, and dreamed of a day when he could give up working in the fields and play music for a living. To that end, he traded a horse for his first set of drums as a teen, and set out on his music career.

By 1955, he was backing Good Rockin’ Bob (aka Ed Thomas) and making more money than he ever would have if he’d stayed on the farm. Growing restless as a backing musician, Bob decided to break out on his own, and formed Little Bob and the Lollipops in the late 1950s, naming the group after Cookie and the Cupcakes. The band soon became a fixture on the Louisiana party and club circuit, playing a rocking hybrid of rock ‘n’ roll and rhythm and blues.

His early singles “Are You Ever Coming Home,” “Please Don’t Leave” and “You Don’t Have to Cry” were Cajun-infused rhythm and blues. After signing with Carol Rachou’s La Louisianne label, Bob’s records took on more of a James Brown influence, as heard on the later singles “Are You Going My Way,” “I Can’t Take It” and “Look Out Mr. Heartache.”

Word to the wise: Take two aspirin and drink a big glass of water after listenin’ to this one!