You are here: Home / Music / Classic Rock / Song Of The Day – “Just Like Me” by Paul Revere & The Raiders 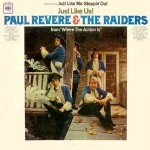 Silly costumes aside, Paul Revere & the Raiders was responsible for some of the most infectious garage rock singles of the late 1960s and early ‘70s.

They recorded “Louie Louie” in the same studio as the Kingsmen classic at around the same time, and were the first to record “(I’m Not Your) Stepping Stone” before The Monkees took it to the charts. They also promoted themselves on TV dressed in full Revolutionary War regalia to help sustain their popularity with appearances on Dick Clark’s American Bandstand, Where The Action Is, Happening ’68, Happening, The Ed Sullivan Show and even an episode of Batman.

It was those silly costumes and wacky TV antics that somewhat obscured the great records they committed to wax and took to the upper regions of the charts including indelible singles like “Kicks,” “Him Or Me – What’s It Gonna Be!,” “Hungry,” “Good Thing,” and their sole number one hit which was actually a Mark Lindsay solo single “Indian Reservation (The Lament of the Cherokee Reservation Indian)” and this one from 1965. Today’s Song of the Day by Eric Berman is “Just Like Me,” an unhinged garage rock classic that climbed all the way to #11 on the charts in 1965.

Paul Revere, whose real name was Paul Revere Dick, succumbed to cancer this past weekend. He wrote on Facebook this past July that he was taking a break from touring because of health issues. “It breaks my heart to have to stay home while the band goes out without me to our next block of dates,” he said. “You don’t even know how much it kills me.”

It kills ‘60s garage rock fans the world over to know that their beloved Paul Revere is now gone. RIP