You are here: Home / Music / Alternative / Song Of The Day – “The Uncle Meat Variations” by The Mothers Of Invention 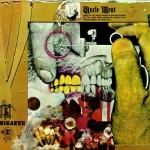 Bach, Beethoven, Chopin, Dvorak…the alphabet of classical composers goes on and on…and then you come to “Z.”

May I offer “Zappa?” Yup, Frank Zappa…an artist whose music will be studied by serious composers for generations to come.

You don’t believe me? Then check out today’s Song of the Day by Eric Berman, “The Uncle Meat Variations” from Uncle Meat.

The Uncle Meat album was released in 1969 and was conceived as a soundtrack to a science fiction film that was never finished. The front cover sported the following subtitle: “Most of the music from the Mother’s movie of the same name which we haven’t got enough money to finish yet.”

A finished version of the film was released in the late 1980s bearing many of the scenes filmed for the movie and was rather incoherent. The double album was also planned as part of a suite of albums called No Commercial Potential that included the Mothers’ records Lumpy Gravy, We’re Only In It For The Money and Cruising with Reuben & the Jets.

Frank Zappa: “It’s all one album. All the material in the albums is organically related and if I had all the master tapes and I could take a razor blade and cut them apart and put it together again in a different order it still would make one piece of music you can listen to. Then I could take that razor blade and cut it apart and reassemble it a different way, and it still would make sense. I could do this twenty ways. The material is definitely related.” (Zappa: A Biography – Barry Miles)

The album is one of The Mothers’ and Zappa’s finest, and I opine that it will be studied by serious musicians for years to come.

So, “Roll over Beethoven, tell Tchaikovsky the news.”