You are here: Home / Music / Big Band / Song Of The Day – “Ac-Cent-Tchu-Ate The Positive ” by Johnny Mercer 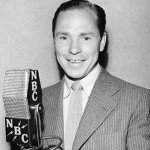 With a resume that includes writing the lyrics to some of the greatest songs of the 20th century including “Goody Goody,” “I’m An Old Cowhand,” “Too Marvelous For Words,” “Hooray For Hollywood,” “You Must Have Been A Beautiful Baby,” “Jeepers Creepers,” “And The Angels Sing,” “Sweet Georgia Brown,” “G.I. Jive,” “Day In Day Out,” “I Thought About You,” “Fools Rush In,” “Blues In The Night,” “Tangerine,” “That Old Black Magic,” “Trav’lin Light,” “Skylark,” “One For My Baby (And One More For The Road),” “Dream,” “On the Atchison, Topeka and the Santa Fe,” “Come Rain Or Come Shine,” “Any Place I Lay My Hat Is Home,” “Autumn Leaves,” “Satin Doll,” “In The Cool Cool Cool Of The Evening,” “Something’s Gotta Give,” “The Glow Worm,” “Moon River,” “Days Of Wine And Roses,” “Charade,” “I Wanna Be Around,” “The Summer Wind,” “Drinking Again,” and hundreds more, the fact that he also founded Capitol Records in 1942 – and it still exists today – kind of takes a back seat to his accomplishments. Southern-born and well to do, Johnny Mercer relocated from Georgia to New York City in the 1930s where he got his first taste of success collaborating with Hoagy Carmichael and singing with Paul Whiteman’s Orchestra. But it wasn’t until he moved to Hollywood and began to write songs for RKO films starring Fred Astaire and Ginger Rogers and the numerous Bob Hope-Bing Crosby “Road” pictures that his career was assured. Here we have his original recording of “Ac-Cent-Tchu-Ate The Positive” from 1944 with backing vocals by The Pied Pipers (featuring Jo Stafford) and Paul Weston and his Orchestra. Numerous people have covered and had hits with this song including Bing Crosby and The Andrews Sisters, Kay Kyser, Artie Shaw, Ella Fitzgerald, Aretha Franklin, Sam Cooke, NRBQ, and most recently Paul McCartney on his latest record “Kisses On The Bottom.” This past April, Stephen Colbert sang this song on his TV show duetting with none other than Julie Andrews.