You are here: Home / Music / Big Band / Song Of The Day – “Streamline” by Artie Shaw 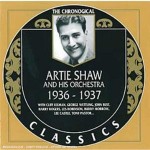 “Benny Goodman played clarinet, I played music.” Such was the animosity between the two main clarinet-playing band leaders during the height of the big band era. While both musicians were exemplary, Artie Shaw was far more inventive in his soloing, composition style, use of instrumentation and crucially, in the arena of arrangements. Shaw held a general disdain towards his audience and the notion of celebrity, putting his boundary-stretching artistic sensibility ahead of commercial sales. His experimentation with strings led to a melding of Jazz and Classical styles creating a wholly new and original listening experience. Here, Shaw’s clarinet solo soars atop a stunning string arrangement designed to keep this sleek 1936 recording moving along at a frantic, streamlined pace.