You are here: Home / Music / Jazz / Song Of The Day by Eric Berman – “Aurora” by Oregon 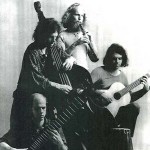 Orgeon is a progressive Jazz quartet that created a singular sound all of their own by melding a then New Age sensibility (before New Age was a genre) with Indian sensibilities. Featuring phenomenal musicianship courtesy of the world-class talents of Ralph Towner on guitar, Paul McCandless on reeds, Glen Moore on piano and the late, great Colin Walcott on the sitar, the group formed in 1971 and released a series of records for the Vanguard label throughout the 1970s. This track is from their 1973 second album called “Distant Hills.” Their history goes back as far as 1960 when Towner and Moore attended the University of Oregon. By 1969, they were both backing Tim Hardin who introduced them to The Paul Winter Consort. The following year, they joined The Paul Winter Consort, who is best known for their George Martin-produced “Icarus” record, and included amongst its ranks Walcott and McCandless. I was fortunate to see the original lineup of Oregon in concert in Washington DC in 1983. At the time they had rejoined forces after a five year layoff and were touring behind their first album on the ECM record label. While touring behind the 1984 follow-up release, “The Crossing,” Colin Wolcott was killed in a car accident in Germany. The group has carried on and they released an album this year.