You are here: Home / Music / Song Of The Day by Eric Berman – “Betrayal Takes Two” by Richard Hell & The Voidoids 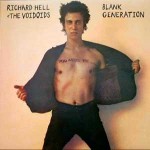 Richard Hell was the original punk! He was a fashion inspiration to Malcolm McLaren who borrowed his spiked hair look, torn clothes and ample use of safety pins as the basis for his own fashion shop, Sex, in London that launched The Sex Pistols and the initial punk scene. But it wasn’t just the look and the clothes that set Mr. Hell apart from the rest, Hell was also a brilliant poet and songwriter who performed in several seminal bands including the original lineup of Television, Neon Boys (where he met Richard Lloyd of Television) and The Heartbreakers (who also included Jerry Nolan and Johnny Thunders of New York Dolls) before striking out on his own with The Voidoids. The Voidoids were no band of slouches either featuring the amazing angular guitar work of Robert Quine, who perhaps is best known for his early documentation of The Velvet Underground, preserving seminal shows on tape that would have been lost to the ages, as well as his years of work playing guitar with Lou Reed, Ivan Julian on guitar and Marc Bell on drums, who was later known as Marky Ramone, drummer for the Ramones. Their debut album, “Blank Generation,” from 1977 included such punk standards as “Love Comes In Spurts,” “Down At The Rock And Roll Club,” the title track, and this song. Hell went on to form the one-off band, Dim Stars, with Thurston Moore and Steve Shelley of Sonic Youth, Robert Quine and Don Fleming of Gumball before giving up on music completely to focus on his writing.