You are here: Home / Music / Song Of the Day by Eric Berman – “One Draw” by Rita Marley 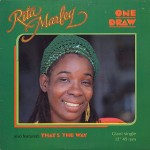 This rock steady celebration of jah spliff really got mucho airplay at parties I attended back in the day. And why not, it’s got a beat that just can’t quit and lyrics we all could relate to! Rita Marley, of course, was the wife of Bob Marley and a member of the vocal group the I Threes along with her cousin Constantine ‘Dream’ Walker and Marlene ‘Precious’ Giffordwas. She met Bob Marley through Peter Tosh and they eventually married in 1966 and they remained married until his death in 1981. The I Threes backed Bob Marley on the road and in the recording studio from “Catch A Fire” in 1973 through “Uprising” in 1980. After Marley’s death she released several albums alone and with the I Threes. This song was released as a 12” single back in 1990. She currently holds the reigns to the Bob Marley Trust and is in charge of all posthumous activity for Bob Marley.