You are here: Home / Music / Big Band / Song Of The Day by Eric Berman – “Bruca Manigua” by Ibrahim Ferrer 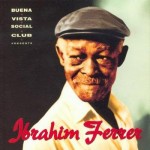 He became the bolero king of Cuba…forty years into his recording career. From his humble beginnings, orphaned at age twelve and forced to busk on the streets singing to survive, to becoming the Grammy-winning “Nat King Cole of Cuba,” Ferrer’s story is indeed a tale of rags to riches, but he wasn’t alone and shared his story with many other deserving musicians. Ferrer sang in Cuban bands during the early 1950s and even had a hit with his recording of “El Platanal de Bartolo.” But like many Cuban artists, Ferrer hit upon hard times because the venues he had made a living playing at were closed by the government during the Cuban Revolution. Ferrer ended up becoming a janitor with his music career far behind him, seemingly for good. Enter rock guitarist extraordinaire, Ry Cooder, who had a successful recording career as a session musician playing with everyone from The Rolling Stones to Captain Beefheart and His Magic Band, and was also a successful recording artist in his own right. Cooder travelled to Cuba in the late 1990s to work on a project with British producer Nick Gold, mixing African high-life and Cuban son musicians together in the studio. When visas did not come through in time for the African musicians, Cooder and Gold changed their plans and located retired orquestra musicians like Ferrer, Compay Segundo (vocals), Rubén González (piano), Omara Portuondo (vocals), Eliades Ochoa (guitar), Manuel “Guajiro” Mirabal (trumpet) and many others, and formed The Buena Vista Social Club, named after one of the many clubs shut down by the Cuban government in the 1950s. The group recorded and then filmed two shows, one in Amsterdam and the other at Carnegie Hall in New York City, resulting in the hit film and album “Buena Vista Social Club.” All of a sudden the musicians, many in their late 70s and early 80s found themselves as in-demand celebrities and began touring the world and releasing hit records. What followed were several Buena Vista Social Club tours, as well as solo records by some of the standout musicians including Ibrahim Ferrer. This track comes from his first solo record, “Buena Vista Social Club Presents: Ibrahim Ferrer” released in 1999. Ferrer continued to tour with the Social Club until his death in 2005.