You are here: Home / Music / Alternative / Song Of The Day by Eric Berman – “The Ruling Class” by Loose Fur 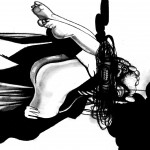 I love a good whistle! Not enough songs these days feature the old pucker up and blow that you can take with you anywhere you go. So, whenever I come across a song that features a good blow, you know I’m gonna have to bring it to your attention. Such is the case with this Jeff Tweedy-penned-and-sung classic from his side band Loose Fur (that’s a pun on Lucifer, in case you were wondering). Loose Fur consists of Glen Kotche on percussion, who at the time of their first record was not yet a member of Wilco, and longtime Wilco collaborator Jim O’Rourke. The group formed in 2000 when Tweedy was asked to participate at The Noise Pop Festival in Chicago. Tweedy chose O’Rourke as a collaborator because he liked the orchestral approach O’Rourke took on the arrangements of his 1997 “Bad Timing” record. Loose Fur’s then-unreleased debut record had a great influence on the recording of Wilco’s “Yankee Hotel Foxtrot” album, to the point that Kotche was asked to replace Ken Coomer on drums in the band and O’Rourke was brought in to remix the record, much to the chagrin of longtime Wilco member Jay Bennett. As a result, “Foxtrot” was Jay Bennett’s last record with the band. The release of the first Loose Fur album was held back until 2003, in favor of releasing Wilco’s now-reworked “Foxtrot.” In 2005, Loose Fur reconvened and recorded their second record “Born Again In The U.S.A.” featuring songs with lyrics written by O’Rourke. This time, the resultant recordings sounded more in line with the experimental approach of Wilco’s “Ghost Is Born” album. Several Loose Fur songs have crept into the Wilco repertoire including this song and “Laminated Cat” from their first album. Now, let’s get back to the original business at hand…what are your favorite song featuring a good whistle?