You are here: Home / Music / Classic Rock / Song Of The Day by Eric Berman – “Cheese And Onions” by The Rutles 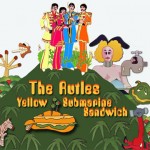 From the 1969 album “Yellow Submarine Sandwich” comes this Nasty classic from the Rutles’ psychedelic period. At this point, the prefab four were at odds with each other. Stig was becoming too bossy in the studio trying to control the group’s sessions. Both Dirk and Barry had both left the group and returned. The end was certainly near due to the boys growing apart and poor business deals set up by Stig’s financial manager Ron Decline. Yet they did managed to squeeze out some earth shakingly great music in those final sessions. After the “Stig Is Dead” rumors began to circulate based on the artwork to their “Shabby Road” album, Barry decided to stay in bed for a year leading to the “Barry Is Also Dead” rumors that swept throughout the music world. After the “Let It Rut” release the next year, the group began to sue each other and Stig accidentally sued himself which was the straw that broke the camel’s back.  However, the Rutle legacy lives on…and on…and on…