You are here: Home / Music / Alternative / Song Of The Day by Eric Berman – “Everyday I Love You Less And Less” by Kaiser Chiefs 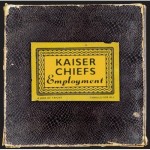 Seven years is a lifetime in the music industry, and so it goes for Kaiser Chiefs. Their debut album, “Employment,” hit the shelves in 2005 giving fans a collection of taught exhilarating early XTC-inspired songs harking back to late ’70s New Wave and Punk Rock. They have released three subsequent albums to less acclaim especially in the US. Last year, they launched a 5th album on their website by posting 20 songs. Fans were allowed to make their own version of the album by choosing any ten to download. Their versions of the album would be posted on the site. If anyone wanted to download a fan’s version of the album from the site, the fan would receive a £1 reimbursement. The band’s version of the record will release this March.