You are here: Home / Music / Classic Rock / Song Of The Day by Eric Berman – “Fresh Prince Of Bel-Air” by Jimmy Fallon (as Neil Young) 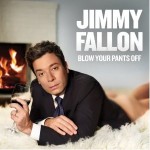 I always thought the greatest Neil Young impression was National Lampoon’s spot on song parody “Old Maid (Southern California Brings Me Down)” by Tony Scheuren from the 1975 Lampoon album “Goodbye Pop,” until this one came along by Jimmy Fallon. It was originally performed on his TV show “Late Night With Jimmy Fallon” and now it has surfaced on his just released second album called “Blow Your Pants Off.” The new record also features another Neil parody (with special guest the real Bruce Springsteen) doing the song “Whip My Hair,” plus duets with Paul McCartney (“Scrambled Eggs”), Justin Timberlake (“History Of Rap”), NBC News’ Brian Williams (“Slow Jam The News”) and others with Dave Matthews, Eddy Vedder and Stephen Colbert. While I wouldn’t say the album is essential listening…it is a indeed a hoot!