You are here: Home / Music / Classic Rock / Song Of The Day by Eric Berman – “Get Down” by Gilbert O’Sullivan 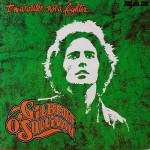 You can deride ol’ Gilbert O’Sullivan all you want, but you can’t deny the guy wrote his own hits…and they were indelible. Perhaps, his getup of a floppy hat and short trousers didn’t make you stand up and shout…or maybe ballads like “Alone Again (Naturally)” and “Clair” weren’t to your liking. But his 1973 hit, “Get Down,” made up for all that moroseness (is that a word?) and syrupy drip with its pseudo T. Rex glam slam rhythms and lyrics about a dog. While he hasn’t set the charts on fire since the 1970s, O’Sullivan has not been resting on his laurels…he released an album just last year called “Gilbertville.”