You are here: Home / Music / Classic Rock / Song Of The Day by Eric Berman – “Wind Up Working In A Gas Station” by Frank Zappa 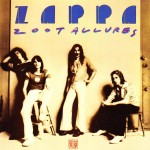 In 1976, the year that the album “Zoot Allures” was released, Frank Zappa was tied up in legal issues. His manager, Herb Cohen, began renting Zappa’s studio out while Zappa toured and allegedly pocketed the money for himself. This led to Cohen making off with tapes for a proposed Zappa three LP set called “Lather” and tapes from sessions for Captain Beefheart’s “Bat Chain Puller.” This, in turn, permanently mothballed Zappa and Cohen’s Diskreet record label. It was in this atmosphere that Zappa released his only record on Warner Bros. records. When Zappa took test pressings of the album to radio stations, it was originally a double album including tracks that would later turn up on “Sleep Dirt.” Somewhere in the interim, it was trimmed down to a single record. The album’s title is a pun on the French expression “Zut alors” which roughly translates to damn it. While tracks like “Black Napkins” and “The Torture Never Stops” became concert staples for the rest of his touring career, this crunchy little ditty was seldom, if ever, performed. It’s a shame, too, since it’s got some killer guitar work all over it.