You are here: Home / Music / Classic Rock / Song Of The Day – “Hard Hard Year” by The Messengers 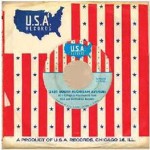 I’ve been listening to late ‘60s Garage Rock all day via an exceptional compilation of tracks originally released on the U.S.A. and Destination record labels out of Chicago. U.S.A. is known to most as the label that released The Buckingham’s classic chart-topping 1967 single “Kind Of A Drag.” Sundazed Records, a collector’s label that specializes in well-researched compilations and re-issues of classic albums on vinyl, released an essential 3-LP set featuring 40 recordings from the two labels’ vaults several years ago. The Messengers formed out of a dorm at Marquette University in Milwaukee, Wisconsin by bass player and vocalist Greg Jeresek. The band signed with U.S.A. before moving on to Motown Records with little hit success. In their wake, they left a clutch of great 45s, especially this superb slice of Psychedelia. Spinning this collection is like going through a parallel universe late ‘60s hit parade that could have been…there are so many great tracks, that with better circumstances should have been bumping up against hits by The Rascals and The Monkees pouring out of transistor AM Radios during the late ‘60s.