You are here: Home / Music / Alternative / Song Of The Day – “Mulberry” by Yoko Ono, Kim Gordon and Thurston Moore 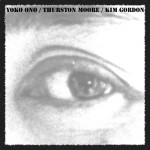 Yoko Ono — You either love her, or you so totally loathe her that you can barely put your hate into words. As for me, I think she’s about as original and daring as they come…in the best way possible. Yoko, of course, was the Fluxus artist who married John Lennon and got a raw deal when she was wrongly credited with breaking up The Beatles. That said, Paul McCartney recently stated that Yoko had little to do with their demise. Thurston Moore and Kim Gordon were husband and wife for many years, and are founding members of art-rock-punk band Sonic Youth. As for the music…what would you expect from this, not unlikely, trio! Yoko has been releasing Dada records like this since the 1960s, while Sonic Youth have been there and done that as well throughout their storied punk career. Together, the three have released one of the most adventurous and challenging records this year called “YokoKimThurston,” chock full of installation music for the not-so-faint-of-heart. Not everyone’s cup of tea for sure, but what they’re doing is just the tonic for those of us who have been Biebered and Aguliera’d to distraction.