You are here: Home / Music / Classic Rock / Song Of The Day by Eric Berman – “In Memory Of Elizabeth Reed” by The Allman Brothers Band 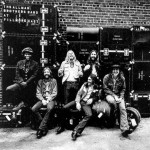 The studio version of this Dickie Betts original appeared on their 1970 album “Idlewild South.” The title of the song was inspired by a headstone Betts had seen while hanging out at the Rose Hill Cemetery in Macon, Georgia…the very same cemetery that provides the final resting place of both Duane Allman and Berry Oakley. By the time of the Fillmore East shows that made up their classic 1971 live album, “Reed” had already become a concert staple featuring the dual guitar soloing of Betts and Duane Allman. It is also the place where Southern Rock meets Jazz Fusion. This clip features the classic 1970 incarnation of the Brothers with Duane Allman, Greg Allman, Dickie Betts, Butch Trucks, Jai Johanny Johanson and Berry Oakley.