You are here: Home / Music / Classic Rock / Song Of The Day by Eric Berman – “I’ve Had Enough” by Pete Townshend 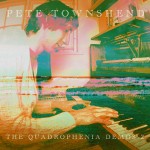 One of the gems I picked up on a Record Store Day  was the second volume of Quadrophenia demos by Pete Townshend pressed on 10″ vinyl. The first volume was released in November 2011 on Black Friday Record Store Day. Also in 2011, The Who released a deluxe Quadrophenia CD box set that featured the whole two record set in demo form as bonus tracks. The demos illustrate Townshend’s creative process of pretty much having everything figured out ahead of time before he presented the songs to the band. The arrangements are all there in demo form with Townshend handling all instruments, overdubs and vocals. While Roger Daltry was a more dramatic vocalist, Entwistle the definitive anchor to the band and Moon a far more exciting drummer, Townshend holds his own on these recordings and really could have released them as a solo record. As far as the album is concerned, Quadrophenia was Townshend’s last real credible musical statement. Sure “Who By Numbers” and “Who Are You” are good albums, but they are patchy collections of songs without a defining theme. Most of his solo records, barring “Empty Glass” are pretty uneven with “The Iron Man” being the low point of his career.  I also feel Quadrophenia is a far more consistent and developed collection compared to Tommy, Townshend’s other epic musical statement.