You are here: Home / Music / Alternative / Song Of The Day by Eric Berman – “Johnny Carson” by Das Damen 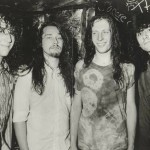 Das Damen was an alternative band from New Jersey who was originally signed in 1986 by Thurston Moore (of Sonic Youth) to his record label. The band consisted of Jim Walters and Alex Totino on vocals and guitar, Phil Leopold von Trapp on bass and vocals and Lyle Hysen on drums. They recorded throughout the late 80s and early 90s mostly for the SST record label which was also the home of Minutemen, Husker Du and Black Flag. While most of their music was considered post punk and hardcore, they were also prone to covering great pop tunes by influences like The Beatles and The Beach Boys. Their “Marshmallow Conspiracy” EP was withdrawn when it was discovered that the song “Song For Michael Jackson To $ell” was an uncredited cover of The Beatles’ “Magical Mystery Tour.” There was no such controversy with this cover of The Beach Boys’ “Love You” track, “Johnny Carson,” that appeared on the 1990 “Smiles, Vibes and Harmony – A Tribute To Brian Wilson“ CD. The now-out of print CD also featured tracks by Sonic Youth, Peter Stampfel & The Bottlecaps, Handsome Dick Manitoba, Nikki Sudden & The Mermaids and many others.