You are here: Home / Music / Alternative / Song Of The Day by Eric Berman – “Kashmir” by Led Zeppelin (“Celebration Day”) 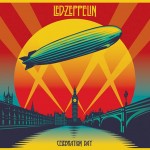 OK, I’m gonna go out on a limb here and make a statement that will have Led Zep fans loathing my very existence. The Led Zeppelin of the 2007 reunion show and recent “Celebration Day” DVD/CD are so much better in every way than the Led Zeppelin of “The Song Remains The Same” circa 1973. Or, at least, the slightly touched up Led Zep of 2007 is better than the 1973 model. While it’s tough to compare a band that’s fresh off of releasing an album like “Houses Of The Holy” with a bunch of semi-retired veterans who have remained somewhat active over the years with various projects of relative merit, this final lap around the track for Led Zep ’07 found them a tight, succinct unit. In contrast, the Led Zep of 1973 were often sloppy, bombastic and ponderous on stage, making the “Song” soundtrack and bootleg concerts from the ’73 tour unlistenable at times. I will concede that Robert Plant’s voice is just a mere shadow of the miraculous wonder of a voice he had back in the day, but Plant rose to the occasion for the 2007 reunion, and with the addition of studio postproduction touch-ups, his voice sounds terrific here too. Besides, the 1973 Madison Square Garden recordings that provided the soundtrack to “The Song Remains The Same,” were also heavily touched up. Jimmy Page and John Paul Jones are as great as ever in 2007, and the band looks and sounds like they are having a ball on stage. And what can be said about Jason Bonham, other than there are no better substitutes for father John than his son, who makes mincemeat out of his drum skins. Now let’s talk image a little bit…” The film portrayed the band members via mystical vignettes that were just plain silly (and slightly boring) in 1976 when the film was released, although with hindsight those prog-rock visuals do come off somewhat nostalgic today (and still pretty silly). The “Celebration Day” film and concert is all business with none of the histrionics that surrounded the reunion (resulting in over 20 million requests for tickets to the show), with a focus squarely on the band and the occasion. I really didn’t want to buy into the whole “Celebration Day” hype machine, but I must admit that I am sitting here with a big grin on my face enjoying the latest installment in the Led Zep cannon. So, is “Celebration Day,” essential listening? Maybe not, but for anyone who remembers laughter, it’s a welcome addition to their discography…and heck, I’d go see them in a heartbeat if they decided to take the show on the road!