You are here: Home / Music / Alternative / Song Of The Day by Eric Berman – “Me And The Wind” by XTC 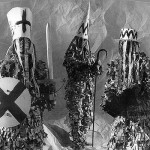 They were a band with two very distinct songwriters…Colin Moulding wrote some of their biggest early hits (“Making Plans For Nigel,” “Life Begins At The Hop”) that were typified by stop-start rhythms, big drums and infectious melodies, while Andy Partridge was the guy who was responsible for some of their prettiest, most pastoral recordings (“Summer’s Cauldron,” “Dear God,” “Love On A Farmboy’s Wages”). XTC’s sixth album, “Mummer,” where this song hails from, was the first album the band released after giving up touring for good. Andy Partridge began experiencing stage fright due to extreme anxiety attacks, and after the first date on their US tour behind “English Settlement,” he could no longer perform, forcing the band to cancel the rest of their performances. This was indeed a shame, since I saw them in 1980 on the “Black Sea” tour and they were a force to be reckoned with on stage. “Mummer” was also the last album with original drummer Terry Chambers, who left during its recording due to the band’s decision not to tour anymore. Fortunately, the anxiety attacks didn’t diminish Andy Partridge’s songwriting prowess as exemplified by this song.